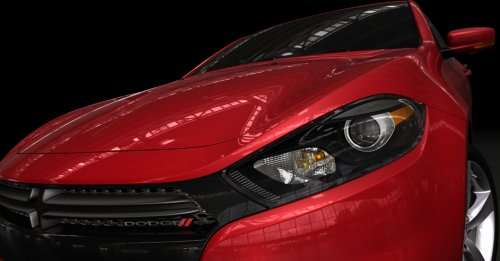 Yesterday, the Chrysler Group offered up the first official information on the new 2013 Dodge Dart including a couple tightly cropped teaser images and a brief mention of the engines available at launch but while speaking yesterday with Reuters, Chrysler/Fiat CEO Sergio Marchionne declared that the new Dodge Dart will be the first Chrysler Group vehicle to offer 40 miles per gallon.
Advertisement

When the Chrysler Group first dropped the details on the 2013 Dodge Dart, the company announced that it would be available with revised versions of the 2.0 and 2.4 liter World Engines; now sporting the catchy new name Tigershark. The 2.4L engine will benefit from Fiat’s MultiAir technology for improved fuel economy and more power but those who want the best fuel economy possible will likely look to the 1.4L turbocharged engine recently introduced in the Fiat 500 Abarth. Click here for more on the 2013 Dodge Dart and images of the new Dart R/T.

Marchionne has stated that the 2013 Dodge Dart will receive its official 40+ mpg rating by the end of this month. If the initial Dart models will not offer the 9-speed automatic transmission, it is unclear whether that 40mpg claim will include the 6-speed dual clutch, the new 9-speed ZF unit, or the third (that we presume and hope is a proper manual transmission) but in any case – should the Dart be rated at 40mpg, it will be the first vehicle offered by Chrysler to reach that plateau. Part of the agreement between Fiat SpA and the US Government when Fiat stepped in was that the Italian automaker would receive 5% of ownership once the Chrysler Group offered a vehicle that reached 40mpg with Fiat technology…and this could be that vehicle.

Fiat currently holds 53.5% of the Chrysler Group so once the 2013 Dodge Dart receives the 40mpg rating, Fiat’s stake in the smallest of the American automaker will jump to 58.5%. The other 41.5% is owned by the retiree fund for the United Auto Workers union.

The 2013 Dodge Dart is the first of what is expected to be at least eight new Chrysler Group vehicles using the new CUSW (compact US wide) platform with the next in line likely being the replacement for the Jeep Liberty. The Dart will be built at Chrysler’s Belvidere Assembly Plant alongside a few Jeep models, some of which will share the CUSW platform with the sporty new compact sedan.

The 2012 Dodge Dart will make its formal debut at the 2012 North American International Auto Show in Detroit and TorqueNews will be there to bring you the Dart and other major debuts from the Motor City!

Auto Driver wrote on December 7, 2011 - 9:15pm Permalink
Dodge Dart MPG is really amazing. I would call it a semi-performance car and with such an MPG this is going to be one of the highlights at the upcoming Detroit Auto Show in 2012. Good job Dodge.
Just a Driver wrote on December 9, 2011 - 10:14am Permalink
It's too little. I don't like this car and the MPG is not too high. Today when you buy a car you buy it for 7 years as the quality has gone up. What is Dodge Dart 40 MPG in 7 years? People will plan for MPG that has 60-80 miles per gallon in 7 years or so. You can't discard a car before that.

Tsingshan's Threat to Tesla: EV Maker Is In Battery Crosshairs
Tesla-Funded Research Reveals One of The Biggest Mysteries of EV Battery
END_OF_DOCUMENT_TOKEN_TO_BE_REPLACED