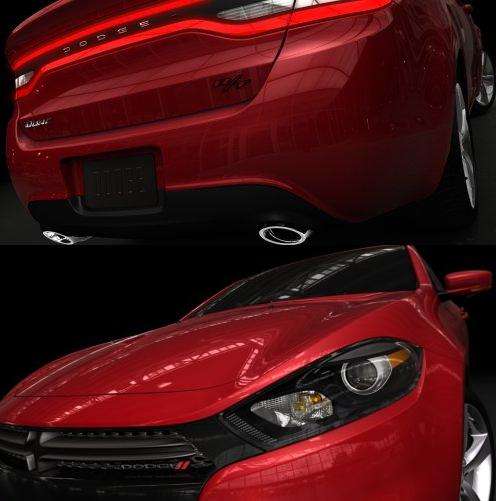 We have known for some time now that the Chrysler Group would use the 2012 North American International Auto Show in Detroit to unveil a new compact sedan based on Alfa Romeo architecture but this morning, the folks under the Pentastar offered up a handful of information on this new model – officially named the 2013 Dodge Dart.
Advertisement

The 2013 Dodge Dart is based on the Alfa Romeo Giulietta, which has proven to be one of the company’s most popular vehicles in the European market and with a handful of alterations – Chrysler expects the 2013 Dart to see the same success in the vital compact sedan segment. This new modified version of the Italian platform has been named the Compact U.S. Wide (CUSW) chassis, which is longer and wider than the European Giulietta to accommodate the preferences of American car buyers. The 2013 Dart will be comprised of a class-leading 68% high strength steel conent that should afford this car incredible rigidity and safety measures while also allowing the car to be lighter than other vehicles of a similar size that do not go with the high strength steel. Over the past few years, we have seen the use of high strength steel become very popular and competitors like Hyundai and Ford make good use of this material in their compacts.

The first images of the 2013 Dodge Dart offer a close up look at a sleek, aggressive compact sedan with projection style headlights that flow down into the familiar Dodge crosshair grille treatment – all of which are clad in gloss and satin black in these early images for an extra sporty look. Dodge has recently made a push for front end designs that look mad and the Dart fits that nicely, with the “face” of the car offering a menacing scowl. Out back, the 2013 Dart really shines (pun intended, by the way) with a gorgeous “race track” style taillight that is remarkably similar to the ultra bright LED taillight housing found on the current Dodge Charger. There has been no indication as to how many trimlines will be offered but based on the two images provided this morning, we can expect a 2013 Dodge Dart R/T to be the premium package..until the SRT group gets their hands on this new compact.

The 2013 Dodge Dart will initially come with three engine options – all of which are 4-cylinder mills. First, the new “Tigershark” 2.0L engine joins the Dodge lineup, followed by the 1.4L MultiAir engine and a new Tigershark 2.4L engine also packing Fiat’s MultiAir technology will round out the engine lineup. Unfortunately, Chrysler hasn’t offered any power ratings for these three new 4-cylinder engines but the company has to keep something up their sleeve for the Detroit debut next month. One thing that we can expect is that the Dart will offer impressive fuel economy figures with the use of the Fiat MultiAir technology while also offering enough power to make the Dart fun to drive.

Chrysler also states that the 2013 Dodge Dart will be available with three transmission choices – but they don’t go into any detail on those. We can presume that there will be a manual transmission, a traditional automatic transmission and a dual-clutch unit possibly featuring paddle shifters but that leaves out the CVT (continuously variable transmission) that was featured in the Dodge Caliber. The CVT has proven to be not the most popular choice among American buyers so there is a chance that the CVT will be absent while the arrival of dual clutch technology could serve as a great marketing tool in the compact sedan segment.

The 2013 Dodge Dart will be built in the USA at the company’s Belvidere Assembly Plant in Illinois. This plant currently builds the popular Jeep Patriot and Jeep Compass, while also previously building the Dodge Caliber hatchback which the 2013 Dart replaces. Belvidere was also the build site for the uber popular Dodge Neon that helped the company achieve compact sedan greatness in the 1990s and early 2000s. Dodge hopes to rekindle the success of the Neon with the new Dart and with a sharp exterior design, a lineup of powerful 4-cylinder engines and the looming prospect of a high performance model from the automaker’s SRT brand – the 2012 Dodge Dart could be the start of great things for Chrysler’s compact sedan segment.

The 2013 Dodge Dart is said to follow many of the theories behind the Dodge Dart of the 1960s – offering a low priced, compact vehicle that is also fun to drive. While the 2013 Dart wont pack the V8 power that made the lightweight Dart of the 1960s so popular, the use of Fiat’s MultiAir technology could allow the new Dodge Dart to race its way into the hearts of Americans – and into the super popular C Segment sedan group. The 2013 Dart will make its formal debut next month in Detroit’s Cobo Hall and you can bet that TorqueNews will be on hand to bring you all of the information on this sporty new compact.

Check out the gallery on the right for a first look at official images of the 2013 Dodge Dart by clicking the thumbnails and stay tuned to TorqueNews.com for all of your breaking automotive news!

Zach Harner wrote on January 1, 2012 - 6:27pm Permalink
WOW. Dodge is a bunch of idiots. I am so sick of them ruining their classics. Congrats on doing a good job on the challenger, but everything else is just stupid. I grew up loving dodge, and now I think I would take a chevy over a dodge any day of the week.