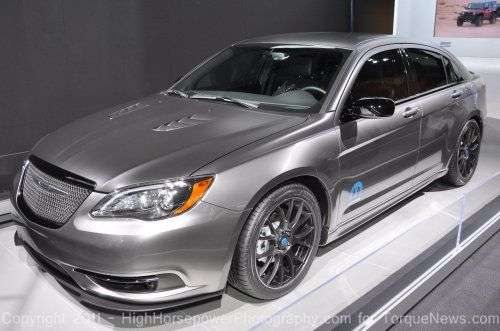 Chrysler leads the US industry in sales growth in November 2011

November 2011 was another good month for the American automotive industry but the king of the hill was the Chrysler Group with a 45% increase over November 2010 - making the smallest of the Detroit Big 3 the strongest brand in terms of growth last month.
Advertisement

First off, while there is no growth rate since the Fiat brand is “new” to the US market, the tiny Fiat 500 moved 1,618 units for a total throughout the year of 17,444 units. This means that unless Fiat blows up and literally becomes the bestselling model in the US, Fiat will likely fall well short of CEO Sergio Marchionne’s goal of 50,000 units sold in 2011. However, with the introduction of the Fiat 500 Convertible, the high performance Abarth model and the eventual debut of the electric Fiat 500, things could continue to improve through 2012 for Fiat.

The top brand from the Chrysler Group in terms of growth was the Chrysler brand with an impressive growth of 92% through November 2011 compared to the same month in 2010. Chrysler’s strongest model in terms of growth was the 300 sedan with 4,066 units sold accounting for a growth of 215% over November last year. The Chrysler 200 mid sized sedan and convertible are new models so there is no point of reference from November 2010 but when compared to the 1,354 Chrysler Sebrings sold in the 11th month of 2010, the new 200 showed a growth of 496%. This shows just how much the alterations made to the Sebring as it evolved into the 200 made a difference to the American car shopper as the 200 has flourished where the Sebring fell flat. in terms of sales, the Chrysler was the top seller with 8,065 units followed by the Town & Country minivan with 6,446 units and the Chrysler 300 sedan at 4,066.

The next strongest marquee in terms of growth for the Chrysler Group was the trail rated Jeep brand with a 50% improvement over November 2010. Growth among the Jeep brand was lead by the refreshed Compass with an 887% improvement over the same month last year, followed by the Liberty at 53% and the Patriot at 46%. The only Jeep model to show a year over year decline last month was the Commander - which is no longer available. When it came to sales volume, the top performer was the Grand Cherokee with 13,545 SUVs sold which made the Grand Cherokee the bestselling single vehicle from the Chrysler Group with only the Ram Pickup besting the full sized Jeep SUV - although the Ram’s numbers apply to the entire Ram pickup family. The Grand Cherokee was followed in sales by the Wrangler at 9.225 and the Liberty with 5,201 units sold.

The Dodge brand was third in terms of growth with a 43% increase through November 2011 over the same stanza in 2010. Dodge was once again lead in growth by the incredibly popular Durango - which saw an increase of 13,996% over last year although it should be pointed out that the previous generation Durango was no where near as popular as the new model. However, this substantial growth rate shows once again just how well the new Durango has been received by the US auto industry. The Charger followed the Durango with an increase of 160% over last November and the lightly refreshed Avenger was third with a 102% jump over 2010. Dodge was lead in sales by the Grand Caravan lineup with 6,053 minivans sold while the Avenger was second with 5,643 units and the Charger was third in total sales with 5,099 units sold last month.

Last but not least was the Ram Truck brand, which offers just two models currently in production although dealerships around the country are still selling off the remaining Dakota compact pickups. As is almost always the case, the full sized Ram pickup lead the brand that shares its name in both sales volume and growth with the mighty Ram moving 19,739 trucks for an improvement of 7% over last November. The other current production model from the Ram Brand is the “new” Ram C/V, a work horse minivan based on the Dodge Caravan and as it has begin to reach dealers around the US, the Ram minivan moved 226 units.

The Chrysler Group can expect to benefit next year through a variety of new models, the most important of which will likely be the new Dodge compact sedan based on Alfa Romeo architecture. That model is set to make its debut at the 2012 Detroit Auto Show and once it does, Chrysler expects to have a much stronger hand in the popular compact market against the likes of the Ford Focus, the Chevy Cruze and the Toyota Corolla.