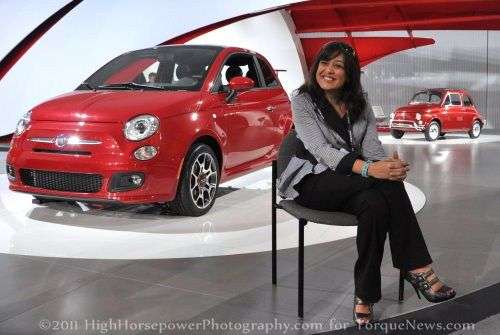 While the details around the whole matter are scarce, the Chrysler Group has announced that Laura Soave, head of the North American branch of the Fiat brand, has left the company to “pursue other interests” and with her departure long-time Chrysler Group team member Tim Kuniskis will step in to fill that role.
Advertisement

Laura Soave (shown on the right) was appointed to head up the relaunch of the Fiat brand in North America and while the compact 500 met the NA market with a fairly positive review, the introduction of Fiat to modern America has been a very slow one. Early on in the year, the opening of dealerships was delayed as those specially selected business owners were required to make a substantial investment to build stand-alone facilities in which to house their Fiat brand. On top of that, the early marketing campaign was slow to roll out and even the first advertisements did hit the TV and newsstands, the American public was slow to respond. The result of these delays is that Fiat has sold just 21,380 new 500s through the end of October – well below half of what Fiat CEO Sergio Marchionne planned to see the Italian brand sell through 2011. Sure, there are still two months left in 2011 but with the Fiat 500 some 28,620 units away from meeting its annual goal; Fiat would have to become one of the bestselling models in America to hit 50,000 units be year end.

It should also be pointed out that there has been no official reason for Laura Soave leaving her position atop the Fiat brand and it could have fully been her decision. However, after a rough first year for the new Fiat 500 in North America you have to wonder if the shot-callers at Fiat SpA and the Chrysler Group had some influence in the lovely Miss Soave deciding to pursue other interests. Soave’s departure comes just over a year after she was on stage at the 2010 LA Auto Show to officially introduce the world to the North American Fiat 500.

The position as the head of the North American Fiat brand has been filled by Tim Kuniskis – a longtime team member who most recently served as the Director of Chrysler brand and Fiat brand product marketing. Kuniskis will now oversee all North American operations for the Fiat brand, including sales, service, marketing and dealership network growth.

“Tim brings broad expertise and leadership in dealer operations and marketing where he has been already working with the team to shape the direction of the Fiat Brand,” said Sergio Marchionne, Chairman and CEO, Chrysler Group LLC. “As North American Head of Fiat, much of his immediate focus will be working with the dealer body where his fresh perspective from the operational side, as well as that on the commercial side, will begin the Fiat Brand’s next chapter.”

Since Fiat SpA took over the reins of the Chrysler Group, CEO Sergio Marchionne has shown that he isn’t shy to shake up the management when things are not going as planned. Soave seemed like a great fit for the Fiat brand in North America but with sluggish sales, it looks as though Chrysler has made a move in hopes of stepping up the pace of growth for the Fiat 500 in the US.