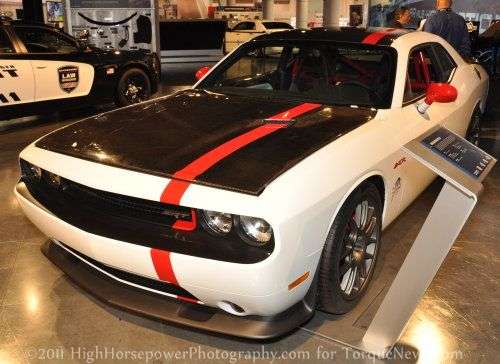 The Chrysler Group’s Mopar performance and aftermarket division always brings out some great concept vehicles to the SEMA Show and 2011 was no different with the biggest splash being made by the Dodge Challenger SRT8 ACR – designed to pay homage to the Dodge Viper SRT10 ACR that has recently reclaimed the Nürburgring production car lap time record.
Advertisement

The American Club Racer (ACR) trimline has been around for some time, making an appearance on the Dodge Viper a few times as well as the now-gone Dodge Neon SRT4 but this lightweight racer package has not been seen on the Dodge Challenger – until now. Like the Viper SRT10 ACR, the Mopar-built Challenger SRT8 ACR is based on a standard production version with little done to the engine output but like the Viper and Neon ACR, the Challenger ACR is packed with modifications that improve the handling and cut the curb weight.

The Dodge Challenger SRT8 ACR begins inside, where the Mopar Underground team has removed a great deal of the standard Challenger SRT8 interior, with some components being replaced with race-ready components while others are gone altogether. The rear seat is gone with a chassis-stiffening rollover bar in its place and the comfy leather seats of the SRT8 are yanked in favor of a set of lightweight adjustable Sparco race seats complete with safety harnesses. Next, the stock door panels are removed and some gorgeous carbon fiber inserts with protruding reinforcement bars adding a little contrasting color. Notice in the image of the inner door panel in the gallery on the right that the Challenger SRT8 ACR does retain the power locks, windows and mirrors so the car is not completely without the creature comforts of the SRT lineup. Finally, the interior is capped off by adding the carbon fiber center console from the Mopar Drag Pak Challenger with a Mopar short throw shifter allowing for smoother shifts.

Next, the Mopar Underground team turned their attention to the exterior, where a carbon fiber hood, trunk, rear spoiler and taillight surround are added in place of the stock components. The parts of the Challenger ACR that are not carbon fiber are finished predominantly in white with the roof and wheels being finished in a charcoal tone – giving the car a similar look to that seen on the original Dodge Viper SRT10 ACR models. This ACR package is finished with an offset red stripe running the length of the car with more red on the mirror caps and on the high performance brake calipers while the familiar ACR badge is found on the front fenders.

While the engine and transmission of the Dodge Challenger SRT8 ACR remain relatively unchanged, this track-built beauty includes a Mopar cold air intake package and catback exhaust system although no increase in power is stated. Next, Mopar has added a full coilover suspension system and a front strut tower brace from their performance parts catalog while a set of Goodyear F1 Supercar performance tires help to make the most of the 470 horsepower and 470lb-ft of torque produced by the 392 cubic inch Hemi.

Unfortunately, the Dodge Challenger SRT8 ACR is only a “design study” but considering how many of the components seen are already available from the Mopar performance parts catalog, it wouldn’t take much work for a Challenger SRT8 owner to build one of these cars at home. Even those parts not offered by Mopar (the seats, the hood, the wheels, the trunk) are all readily available in the aftermarket for a price. Hopefully the people at Chrysler will have it in their hearts to offer this package in limited numbers in the near future – thus allowing Mopar lovers to use the Challenger SRT8 ACR in stock racing classes.

Check out the gallery on the right for a closer look at the new Dodge Challenger SRT8 ACR from the 2011 SEMA Show!