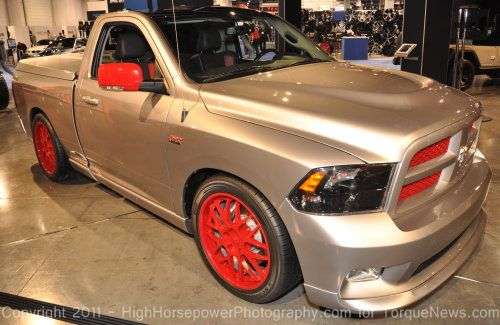 Among the many high performance models at the Mopar display at the 2011 SEMA Show was the Ram 392 Quick Silver - a Ram 1500 equipped with the 6.4L Hemi from the current SRT8 lineup and while this truck is just an “image vehicle“, Mopar points out just how easy it was to make this truck, perhaps suggesting how easy it could be for Ralph Gilles’ SRT Group to offer a new high performance pickup.
Advertisement

The Ram 392 Quick Silver started as a 2011 Ram 1500 R/T and with just “seven easy steps”, that sporty truck was converted into a high performance pickup that could very easily hang with some of the top muscle cars of the day. Mopar explained on the placard accompanying the truck how these seven steps converted the Ram R/T to the Ram 392 Quick Silver, which we have detailed below.

This transformation to become the Ram 392 began by removing the 390 horsepower 5.7L Hemi in favor of the 6.4L, 392 cubic inch Hemi which in stock form offers 470 horsepower and 470lb-ft of torque (step 1). Mopar then added a cold air intake package, exhaust headers and a high flow exhaust system with electronic cutouts (step 2) to increase the power of the 392 Hemi - although no exact power output has been stated. This power is channeled to the 4.10 rear end by an automatic transmission with bright red 22” Mopar Underground wheels wrapped in high performance Pirelli rubber for optimal traction.

Once the power of the Ram 392 Quick Silver was taken care of, the Mopar team attacked the braking system, installing Brembo brake package featuring 15” rotors and six piston calipers to help this muscle truck to stop as quickly as it accelerates (step 3). To improve the aerodynamics and down force of this sport truck, Mopar then added a hard tonneau cover with an integrated rear spoiler (step 4) while a body kit featuring a new aluminum hood and a Mopar suspension package allow the truck to sit much lower and handle better (step 5).

Mopar then turned their attention to the interior of the Ram 392 Quick Silver, adding a sporty Katzkin leather package, a Kicker sound system, Mopar pedals and lots of red accents to give this truck an SRT-inspired, unique passenger compartment (step 6). Finally, Mopar had the entire truck painted silver with various red accents in the grille, the heat extraction openings in the hood and the various badging (step 7) - all of which helped to create the incredible muscle truck shown in the gallery on the right.

Since the Viper V10 powered Dodge Ram SRT10 was laid to rest years ago, the Mopar community has been begging for a high performance Ram pickup. I had a chance to ask SRT President Ralph Gilles a few months back about he liklihood of an SRT Ram, variant and while the boss didn’t say yes - he also didn’t say no while confirming that there was indeed a market for something like this incredible show truck. In boasting just how easy it was for Mopar to take the existing Ram 1500 R/T with parts that are largely already existing, it has to be questioned whether or not this is Chrysler’s way of showing just how easily the company could whip up a high performance Ram 1500 SRT8.