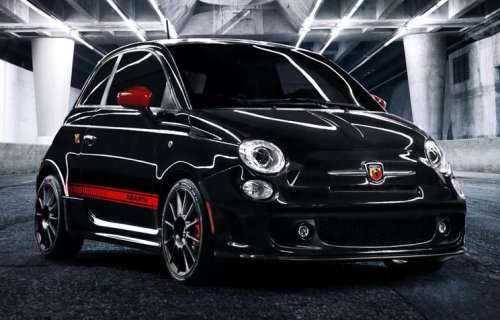 Among the vehicles making their North American production debut at the 2011 LA Auto Show is the 2012 Fiat 500 Abarth – a high performance, track ready version of the subcompact Italian coupe that reintroduced Americans to the Fiat brand earlier this year.
Advertisement

The 2012 Fiat 500 Abarth is built around a high performance version of the 1.4L MultiAir 4-cylinder found in the “regular” 500 models available in the US but this tiny mill has been turbocharged and twin-intercooled to produce an impressive 160 horsepower and 170lb-ft of torque. The 2012 500 Abarth sends this power to the front wheels with help from a heavy duty 5-speed manual transmission coupled with Fiat’s Torque Transfer Control (TTC) system. Helping to announce the presence of this high performance subcompact is an Abarth high flow dual exhaust system – an item that the Abarth brand has long offered for a wide variety of vehicles.

Next, the 2012 Fiat 500 Abarth builds upon the excellent handling of the “Cinquecento” beginning with a dose of Abarth tuning to the chassis featuring Koni Frequency Selective Damping (FSD) front shocks. These shocks are tuned to offer a sporty ride on the open road or on the track while also providing for a comfortable ride under average driving situations. Out back, Abarth has beefed up the suspension of the Fiat 500 Sport with a reinforced rear axle, coil springs that are 20% stiffer than the standard units and a larger rear stabilizer bar – all of which work together to offer a tight, sporty ride while still maintaining the comfort expected from a world class Italian compact. Behind the lightweight Abarth wheels and high performance tires is a high performance brake system coupled with an Abarth electronic stability control (ESC) system tuned for high speed driving.

The 2012 Fiat 500 Abarth has received a handful of exterior modifications to help it stand out – and perform better – on the track or on the open road. Abarth began up front, adding a front fascia with a lower area that protrudes out further than the non-Abarth 500 which improves the aerodynamics and the air intake capabilities of this sporty subcompact. The lower fascia openings help to funnel air through the twin intercoolers (which are mounted towards the outer edges of the front end, outside of the foglights) while the large center section helps to enhance the cooling properties of the Cinquecento. Along the sides, the 500 Abarth features unique Abarth side skirts along with the special Abarth-branded 16” or 17” lightweight aluminum wheels that offer a good clear look at the bright red brake calipers. Out back Abarth enhances the 2012 Fiat 500 with a roof mounted spoiler that adds downforce, while along the bottom of the car, a special splitter helps to improve rear end aerodynamics while also enclosing the bright polished dual exhaust tips. Finally, this new high performance Fiat 500 Abarth Coupe features a heavy dose of special badging, including the front and rear logos, the stripes along the lower rockers, on the front of the quarter panels and on the wheels.

On the inside of the 2013 Fiat 500 Abarth does not get the level of modification that the drivetrain or exterior get but beginning with the blacked-out interior treatment, the cabin of the Abarth model is distinctly its own. The improvements center around the driver, beginning with an angular race-style steering wheel similar to that seen on the current SRT lineup with a variety of control buttons located on the spokes. Beyond the sporty steering wheel is a performance oriented gauge cluster with a new boost gauge mounted on the left side that also encases a shift indicator.

Prior to being unveiled for the North American market, the Abarth engineers made roughly 2 million miles testing the 2012 Fiat 500 Abarth model so in when combined with the 4 million testing miles allegedly behind the modern 500, the high performance Abarth Coupe has extensive testing under the most rigorous conditions.