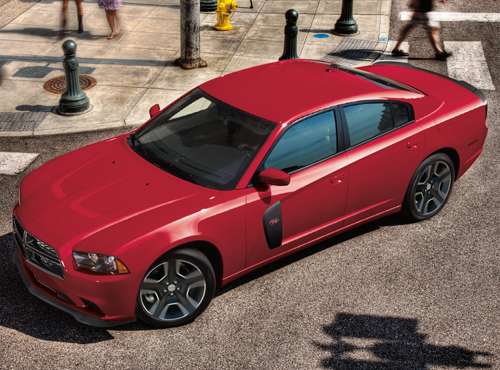 The new 2012 Dodge Charger Redline features three available Mopar stage kits for factory turned performance. It’s the Hemi V-8 crate engine producing 590 horsepower that most will crave yet few will get because it's not street legal.

The new Gen III High Output 426 HEMI engine includes a stout, balanced lower reciprocating assembly that features a forged-steel crankshaft with six-bolt mains at 2, 3 and 4, and cross-bolted 4-bolt mains at 1 and 5. H-beam style rods are made from forged steel and coupled to forged 11:1 compression ratio aluminum pistons. Included is a revised windage tray to provide excellent oil dispersion and prevents oil aeration by the crankshaft.

The Dodge Charger Redline’s cockpit design features premium materials and is further enhanced with a Mopar aluminum shift bezel and aluminum instrument panel bezel with Redline perimeter accent. For a more enthusiast-desired look, Mopar pedal covers are made from stainless steel and feature a rubberized pattern for improved traction.

No pricing info was made public on the 2012 Dodge Charger Redline. Expect pricing info to come at the Detroit Auto Show, which opens with Media Days Jan. 9 and 10 and opens to the public Jan. 14 to 22 after an industry preview Jan. 11 and 12 and a charity preview on Jan. 13.