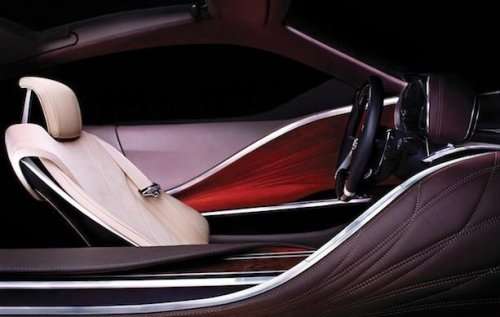 Last week, Toyota issued a tightly cropped teaser shot of the new Lexus Concept set to debut at the 2012 North American International Auto Show in Detroit and we now have our newest teaser of what looks to be a new Lexus sports car – this time focusing on the interior of the luxury concept.
Advertisement

Shown on the right, the latest teaser of the new Lexus Concept coming to Detroit features a unique design, with continuous flowing lines filling the cabin – all of which are wrapped in embroidered leather, wood, and other high quality materials. Lexus and parent company Toyota still haven’t offered any real information on this new Concept but the steeply sloping roofline supports that idea that this new Lexus will be a sports car. However, in fine Lexus fashion, we can expect the Concept being unveiled at the 2012 Detroit Auto Show to offer all premium interior finishes, a high end infotainment system and a comfortable – yet sporty- race inspired seat also clad in leather.

The only official information offered on the Lexus Concept coming to the Detroit Auto Show is that the car was designed at the Calty design studio in Newport Beach, California. We do not know what type of vehicle this is, whether it sports a traditional or hybrid (or electric) drivetrain or what – if any – existing Toyota product the new Lexus Concept will be based on.

After seeing the initial teaser of the new Lexus Concept set to debut next month in Detroit (click here to see the front end), I speculated that this could be a sports car based on the Toyota GT-86, the Scion FR-S and the Subaru BRZ. You can click here for a look at the first teaser, showing the front end of the new Lexus Concept which I believe looks to carry some of the lines of the Toyo-baru rear wheel drive sports car. Lexus has shown their sporty spirit with models like the IS-F, the GS350 F Sport and, of course, the incredible Lexus LFA supercar. The issue is that the sport-inspired IS and GS models are the range topping so they are among the most expensive vehicles in the lineup and the LFA carries a $375,000 price tag…making it well out of reach of even most Lexus buyers. However, Toyota and Subaru have seemingly done a great job of developing the new rear wheel drive, Boxer engine powered vehicle so packing the Toyota GT-86 full of luxury amenities and giving it a Lexus name of its own could help Lexus appeal to a younger crowd with a lower price than any of the other sporty Lexus models.

Of course, this is all speculation and until the 2012 North American International Auto Show opens in January, we may not know exactly what Lexus is going to unveil. Hopefully Lexus and parent company Toyota will continue to issue teasers of what could be a very exciting new concept from Lexus.