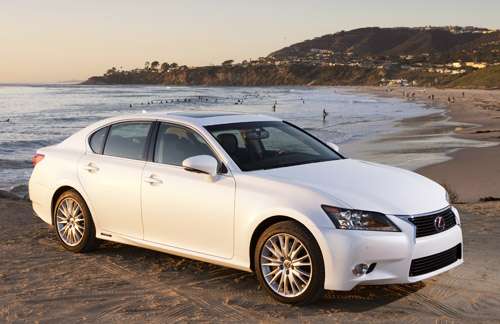 The fourth generation of the Lexus GS Hybrid is an exercise in balancing opposing concepts, something it manages to do very well. First and foremost, it manages to strike equilibrium between the primary attributes premium automobiles embody to one degree or another, namely luxury and performance.
Advertisement

These concepts are well illustrated in the segment by Mercedes-Benz, who tends toward the luxury end of the premium scale, and BMW who clearly represents the performance emphasis on the other end. Lexus has become the premiere luxury brand in the U.S. over its 18-year history by splitting the difference between these divergent goals and hitting the sweet spot midway between a focus on luxury and the myopic pursuit of sheer performance.

That was the essence of Akio Toyoda’s words when five years ago he instructed engineer Yoshihiko Kanamori to take the GS to a new level of design and driving dynamics. Still, there are other aspects of balance embodied in the new 2013 Lexus GS 450h to be considered.

The essential concept of the hybrid vehicle seeks to blend environmental responsibility and fuel economy, without significantly sacrificing performance itself. The Lexus GS hybrid accomplishes both of the former while enhancing the latter.

The hybrid system adds a 52 horsepower motor to the 286 horsepower of the V6 engine resulting in 338 hp total, while still achieving 31-mpg combined and expecting the EPA’s top rating of ULEV II, meaning it aces California’s strict emission codes.

Today’s vehicles, in the effort to create more efficient economy, need to reduce their weight, while maintaining the level of safety the modern buyer has come to expect.

This is achieved by strategic reinforcement augmented by spot and laser welds. Extensive bracing of the underbody, supplemented by the radiator support bracket creates a stiffer platform, enhancing surface feedback to the driver. Cowl side braces increase the rigidity of the front suspension and steering mounts heightening stability while bracing the A-pillar to the fender apron enhances steering response. Energy absorbent construction aids in front impact safety.

The use of ultra high-strength steel, so rigid at room temperature it must be heated to be formed, is used in a simpler structure in the B-pillar to create a stronger, more rollover safe top that is still lighter in weight.

A 10 percent reduction in interior weight was achieved by changing the mostly hidden materials in the door trim, headliner, trunk, tunnel baffling and the center pillar garnish.

In the trunk the need for a hefty motor battery was more harmoniously balanced with the need for truck space by reshaping the battery pack and snuggling it up closer to the rear seats.

Other benefits include the engine’s greater tolerance of fuels containing ethanol, lower emissions and quieter operation.

All the new GS models have a multiple driving mode selector to more finely attune the vehicle to ambient conditions and driver style and mood. In addition to normal settings the operator may choose Eco, Sport or Sport plus modes.

In Eco mode, the throttle and air conditioning are tied to energy efficiency parameters. When the hybrid model is put into Sport mode, throttle and engine responsiveness are enhanced, for quicker acceleration.

In Sport plus mode, the modifications of the Sport mode are elevated by suspension and tech systems to raise the damping force of the Adaptive Variable Suspension, modify the degree of assistance from the Electric Power Steering, alter the amplification factor of the Variable Gear Ratio Steering, add to the convergence of Dynamic Rear and change the level of intervention by the Steering Vehicle Dynamics Integrated Management.

On the 2013 Lexus GS 450h, when you select the Sport or Sport plus mode, the hybrid system indicator is replaced by a tachometer.

In the hybrid there are also two other selectable driving modes: EV and Snow. If memory serves, the EV or all-electric mode is good about four miles with a top speed of 20 or 25-mph. No information was available regarding the Snow mode at the time of this post, but will provided as soon as Lexus representatives can provide it.

Some vehicles have drive selectors that don’t seem to make any perceivable difference to the driver. As engineer Charles Hubbard of the University of Toyota put it, “Sometimes buttons are just buttons.” The different driving modes in the GS make distinct and easily noticeable changes in the way the vehicle performs.

Though the difference in weight and the car’s center of gravity changes the way the hybrid model performs compared to the purely petrol powered models, it is still distinct. Though the hybrid doesn’t have the snappy agility of the AWD or F models, it still is a pleasure to drive. It may lean a little towards the Mercedes-Benz end of the scale as a result, but who’s complaining?

The Lexus GS models all feature a new 12.3-inch information display that can provide graphics for maps, navigation and entertainment or climate at the same time.

The new vehicles also feature the new version of Lexus Enform, the interactive infotainment center that allows smartphone users to download free cloud-based apps via the car and then activate them using the Voice Box causal conversation voice recognition system.

On the center console a new display controller more closely mimics the use of a mouse, making hand control of these features easy and intuitive to use.
In a brilliant stroke of sustainability, the 2013 Lexus GS 450h features a leather wrapped steering wheel with bamboo inserts.

Another feature of note is the addition of Bi-Xenon Adaptive front headlamps, the ones that point where you’re going in turns.

Though there is much more to this premium hybrid, the vehicles will be touring the U.S. as part of a Consumer Performance Drive. Lexus wants to get as many people behind the wheel to experience it for themselves as possible. They would not be doing that without believing they have a winner on their hands.

All that remains to be seen is whether they can balance an attractive price point with long term affordability. We have no intention of betting against them.