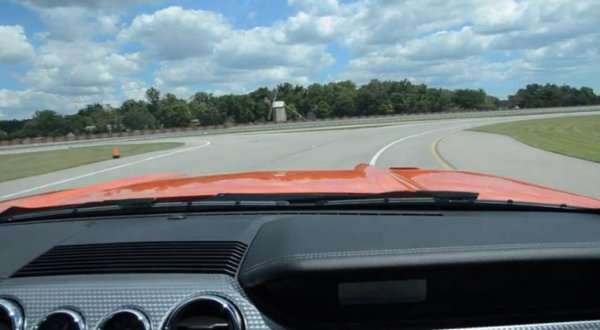 During a small event yesterday morning at their Dearborn Development Center, Ford Motor Company announced the first official power figures for the 2015 Ford Mustang. Afterwards, the small group of journalists present for the big power announcement got to participate in a ride along program with the new Mustang in EcoBoost and GT trim. The location of the ride was a smaller curvy track with some significant hills and dips along the way more of a test track than a racing road course, but the drivers still did their best to push the new Mustang fastbacks hard enough to show off their capabilities.

I foolishly did not charge my GoPro after the 2015 Dodge Challenger Hellcat drive, but I had my Nikon DSLR on hand to record what it was like to ride in the 2015 Ford Mustang EcoBoost and GT. Below you will find each first person video and they both offer a great chance to hear the 2015 Mustang clear its throat, so make sure to have your speakers cranked up.

It will be a few months before most people have a chance to ride in a 2015 Ford Mustang, but these videos will give you a chance to experience the ride in the virtual world as they are pushed around this hilly road course.

Riding Along in the 2015 Ford Mustang EcoBoost
The first car I jumped into yesterday was a Triple Yellow 2015 Ford Mustang EcoBoost fitted with the 6-speed automatic transmission and the EcoBoost Performance Package. I was instantly struck by the throaty exhaust tone of the turbocharged 4-cylinder engine and I think that many people will find it to be an acceptable sound from the mighty Mustang. The EcoBoost accelerated well out of the corners and handled the higher speed corners beautifully.

Riding Along in the 2015 Ford Mustang GT
My next ride was I a Competition Orange (my personal favorite color option) 2015 Ford Mustang GT with the 6-speed manual transmission and the GT Performance Package. I love the grumble and roar of the 5.0L V8, and there is an obvious difference in the levels of speed reached in the straightaways with the 435 horsepower GT engine.

I should note that in the hard turn about halfway through the lap, the driver drops and radio, then slows to pick it up before roaring away in the Mustang GT.