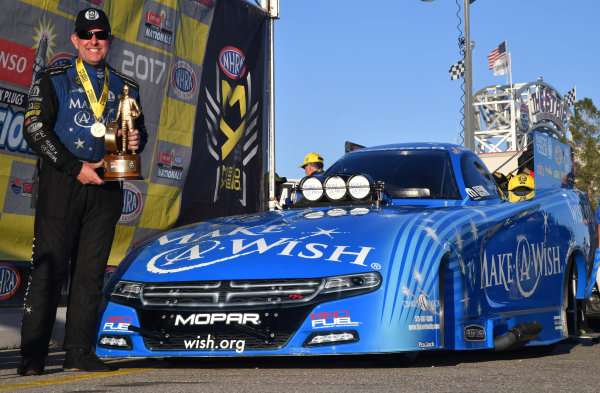 This past weekend, the teams of the Mello Yello Drag Racing Series headed to Las Vegas for the Denso Spark Plug Nationals and for the 3rd time in four events, a Don Schumacher Dodge Charger took the win in the funny car class – with Tommy Johnson Jr grabbing his first win of the season.
Advertisement

The Denso Spark Plug Nationals in Las Vegas, Nevada marked the 4th event of the 2017 Mello Yello Drag Racing Series season and after winning the 1st and 2nd events of the season, the Don Schumacher Dodge Charger funny cars headed into Vegas with the hopes of getting back to their dominating ways.

The DSR Charger funny cars weren't as dominant as they have been in the past, but they were still able to grab the Wally.

Qualifying
The Don Schumacher Racing Dodge Charger funny cars have often been the quickest cars in the class as soon as they hit the track, but the 1st round of qualifying was fairly disappointing. In what would prove to be a relatively slow round, Tommy Johnson Jr (8,874), Jack Beckman (8.661) and Matt Hagan (10.804) all had throwaway runs while Ron Capps turned in the only solid pass with a 3.917 at 324.12 miles per hour. This put Capps in the 3rd spot after round 1 of qualifying while Courtney Force was the quickest car in round one, with her Camaro laying down a 3.867 at 327.66 miles per hour. In fact, in February 2017 the DSR Dodge Charger Beat JFR Chevrolet Camaro in NHRA Funny Car season opener.

Things wouldn’t get any better in the 2nd round of qualifying, with all but one of the cars in the funny car class turning in a throwaway run. That one driver was Matt Hagan, who ran a 3.868 at 330.63 miles per hour – one hundredth of a second slower than Courtney Force’s class-leading run from the 1st round. Literally every other driver in the funny car class had problems in the 2nd round.

The 3rd round of qualifying wasn’t a whole lot better, with many of the drivers who ran 7s and 8s in the 2nd round improving to the 4-5 second range – which still isn’t very good for the average NHRA funny car field. However, in a round where many drivers struggled, Ron Capps, Jack Beckman and Tommy Johnson Jr all laid down solid 3.9X runs.

In the 4th and final round of qualifying, many of the funny car drivers were able to pull together their best run of the pre-elimination rounds, with Johnson, Capps and Beckman all turning in 3.8X runs while Hagan ran a 3.9X.

Eliminations
In the 1st round of eliminations, the bad runs continued, allowing 16th seed Gary Densham and his Ford Mustang to knock out top qualifier Courtney Force in her Camaro. Ron Capps ran into problems and lost to Jonnie Lindberg, who only ran a 4.332 at 250 mph to get the win while Jack Beckman ran a 7.322 at 90.06mph and beat Cruz Pedregon (redlight). Hagan and Johnson both had strong runs, beating Del Worsham and Jim Campbell, respectively.

In the 2nd round, Jonnie Lindberg beat Jack Beckman and John Force beat Matt Hagan while Tommy Johnson Jr beat Robert Hight (redlight). Gary Densham’s Mustang beat Alexis DeJoria’s Toyota when she redlit, setting up a semifinals round with a Ford battling a Toyota on one side of the bracket while the other side had a Camaro-Mopar battle.

Gary Densham was lucky to get into the field with such a poor qualifying time and he was even luckier to sneak through the first two rounds, but his luck ran out in the 3rd round when Jonnie Lindberg ran a 3.991 and 318 mph to Densham’s 5.916.

In the more important battle, John Force and his John Force Racing Chevrolet Camaro went head to head with the Don Schumacher Racing Dodge Charger of Tommy Johnson Jr. DSR and JFR have been engaged in a feud of sorts (mostly between the team owners), and as has generally been the case – the DSR Dodge came out on top. After both cars pulled identical reaction times, Johnson ran a 3.997 at 39mph to Force’s 4.128 at 282 mph.

This set up a final round battle between veteran Tommy Johnson Jr and newcomer Jonnie Lindberg. Johnson showed the rookie how it’s done, pulling a better reaction time and carrying that through the top end – winning the race and the event with a time of 3.933 at 323.66mph.