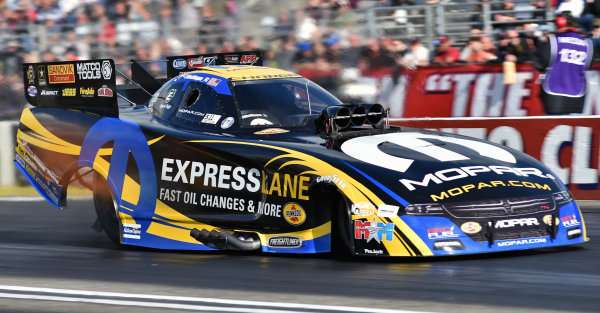 The 2017 NHRA drag racing season opened this past weekend at the Winternationals in Pomona, California, and Don Schumacher Racing got off to a great start as Matt Hagan drove his Dodge Charger funny car to a big win – beating Courtney Force and her John Force Racing Camaro in a Dodge/Chevy final-round shootout.
Advertisement

Don Schumacher Racing and the four Dodge Charger R/T funny cars campaigned by DSR had another great season in 2016, with Ron Capps claiming the title after he, Matt Hagan, Tommy Johnson Jr and Jack Beckman combined to win 14 of the 24 races during the season. That championship season by Capps started back in February 2016 with a win by Ron Capps at the Winternationals and the year before, Matt Hagan drove his Charger to victory at the opening event in California.

Well, the 2017 NHRA drag racing season kicked off this past weekend in Pomona and once again, a Don Schumacher Racing Dodge Charger took the win in the funny car class, with Matt Hagan proving to be too quick for everyone in the field. In fact, Hagan was as quick as any NHRA funny car to ever make a run at Pomona, tying his own track record en route to his season-starting win.

Hagan Dominates Qualifying at the Winternationals
Matt Hagan and his Dodge Charger funny car have been one of the most successful pairings of man and machine in the NHRA funny car class over the past few years, and at the 2017 Winternationals – Hagan opened the season by laying down monster times right out of the trailer.

In the first round of qualifying, Matt Hagan and his Charger ran a 3.840 at 330.15 miles per hour. In that round, only two other cars ran in the 3-second range and they were both about a tenth slower than Hagan.

In the second round of qualifying, several drivers didn’t make a run, but Tim Wilkerson and his Ford Mustang ran a 3.857 at 322.65mph, coming close to Hagan’s top time of 3.84, but coming up short. No one else got into the 3s in round #2.

In the third round of qualifying, things got a little more serious in the funny car class, with 7 of the 18 drivers in the field breaking into the 3-second range. Courtney Force ran a 3.855 and Ron Capps ran a 3.850, but John Force was the quickest in this round, running a 3.849. In round #3, Hagan “only” ran a 3.878, but his first round time of 3.840 kept him in the top spot through 3 rounds of qualifying.

In the final qualifying round, Jack Beckman and Alexis DeJoria both broke into the 3.8XX range, but no one came close to challenging Hagan’s first round number – except for Hagan. On the final funny car qualifying run of the weekend, Matt Hagan went head to head with #2 qualifier John Force and when the Dodge Charger laid down a stunning 3.822 at 335.57 miles per hour, Hagan tied his track record for ET and trap speed.

Going into eliminations, the top five were Hagan, John Force, Courtney Force, Ron Capps and Robert Hight. That is Dodge, Chevy, Chevy, Dodge, Chevy, for those who aren’t sure.

Hagan Dominates Eliminations at the Winternationals
After blasting through qualifying into the top spot in the funny car class, Matt Hagan went into eliminations as the odd-on favorite. In the first round, Hagan ran a 3.885 and crushed Jeff Diehl to advance while his DSR teammates each all joined him in round #2. Tommy Johnson Jr beat Alexis DeJoria, Jack Beckman beat Cruz Pedregon and with the quickest run of the round, Ron Capps beat Bob Bode. Other key matches in round #1 saw Courtney Force and John Force both advance to the next round, while Tim Wilkerson’s Mustang fell in the first round.

In the second round of eliminations, Ron Capps beat Del Worsham while Matt Hagan ran a 3.882 to knock out teammate Jack Beckman, while the two John Force Racing Camaros won as well, with Courtney beating JR Todd and John beat Tommy Johnson Jr. This set up a final four containing the DSR Chargers and the JFR Camaros each going head to head to see which would represent their team in the finals.

When Courtney and John went head to head, the daughter grabbed the advantage at the starting line and she never looked back, running a 3.872 to dad’s 3.886. When Capps and Hagan went head to head, Capps redlit and handed the win to Hagan, who coasted through the top end traps without any need to push the car.

This set up a final round battle between the Chevrolet Camaro of Courtney Force and John Force Racing and the Dodge Charger of Matt Hagan and Don Schumacher Racing. These two team owners don’t get along and there has been plenty of trash talk at and away from the track, but the talk stopped when the two cars pulled into the burnout box.

Matt Hagan took a narrow starting line advantage with a better reaction time than Courtney Force and from there, the Camaro could not run down the quicker Charger. Hagan ran a 3.875 to Force’s 3.901.

In the end, with the exception of the semifinal run where Capps redlit and Hagan let off, he ran a 3.8XX on every pass down the track this weekend and he finished the event by beating a John Force Racing Camaro for the event win.

John Force and Don Schumacher have been having a very public feud with plenty of trash talk both ways, but when the two teams hit the track this past weekend, the talk didn’t matter. All that mattered was who was faster, and thanks to Matt Hagan and his Dodge Charger – Don Schumacher gets the first bragging rights of the 2017 NHRA season.