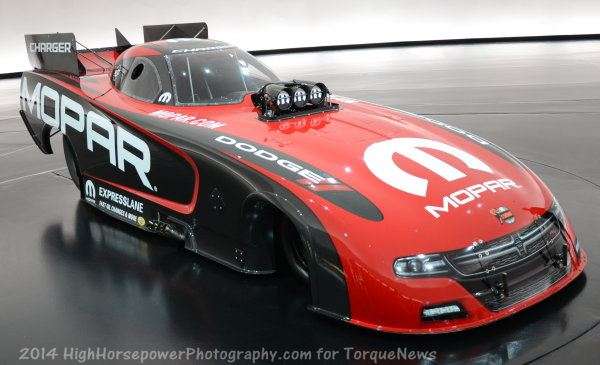 Among the many vehicle debuts at the ongoing 2014 SEMA Show in Las Vegas is the 2015 Dodge Charger R/T Funny Car – a purpose built drag car that will help Team Mopar go after another championship in 2015 with 10,000 awesome Hemi horsepower.
Advertisement

While the main focus of the SEMA Show in Las Vegas is to showcase new aftermarket accessories for street legal vehicles, there is also a major motorsports presence and the Mopar display is often a good place to see the latest and greatest in the world of drag racing. This year, Mopar rolled out their 2015 Dodge Charger R/T funny car which will begin competing during the 2015 championship season and while the Charger Hellcat made big news for packing 707 horsepower – the Charger funny car laughs in the face of any high performance road car thanks to its 500 cubic inch Hemi engine that delivers a bone chilling 10,000 horsepower.

You read that right – the supercharged Hemi V8 in the 2015 Dodge Charger R/T funny car is capable of producing 10,000 horsepower. That is enough power to send the 2,400 pound Charger race car down the quarter mile in the high 3 second range with speeds well over 300 miles per hour. It achieves this incredible power with forced induction and a monster nitro methane fuel system that delivers 90 gallons of fuel per minute.

That is 90 gallons of fuel every minute to make the prescribed 10,000 horsepower in the 2015 Dodge Charger R/T funny car.

NHRA 2015 Charger VS Hellcat 2015 Charger
To put the figures for the 2015 Dodge Charger R/T funny car into perspective, let’s compare this purpose built drag car to the 2015 Dodge Charger SRT Hellcat road car. Of course, this isn’t a realistic comparison, but it helps to show what kind of power the new drag car (and all modern NHRA funny cars) makes in comparison to one of the most powerful production cars in the world.

Hitting the Track in 2015
While this new Dodge Charger drag car made its formal debut at the 2014 SEMA Show in Las Vegas, it will make its on-track debut when the 2015 NHRA season opens next February at the Winter Nationals in Sonoma California. One of the drivers piloting this new Charger race car will be Matt Hagan, who currently leads the 2014 NHRA funny car championship race in his Dodge Charger. Hagan took the title back in 2011 with a Charger while Jack Beckman claimed the title in 2012, also in a Charger. This means that the 2015 Charger funny car body will have some big shoes to fill, but I would expect to see continued success from the Mopar factory back drag racing program with the help of this new body.

arunraj pk wrote on January 31, 2016 - 10:00pm Permalink
nic car i like dodge cars only iam a mechanik my dreem car is dodge