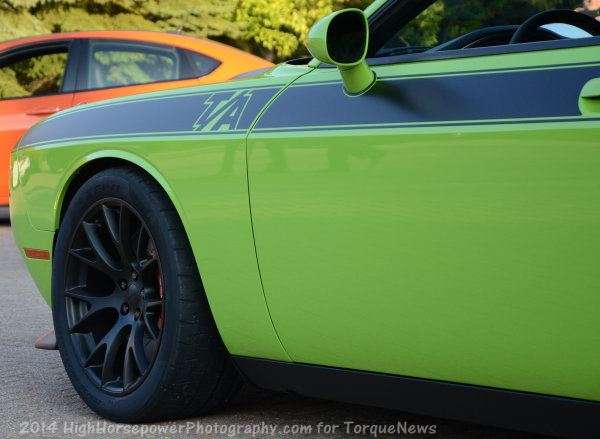 The Dodge Challenger T/A Concept will make its grand debut at the SEMA Show in Las Vegas next month, but we got a chance to check it out a bit early at the Chrysler Headquarters which means that you won’t have to wait until SEMA to find out what makes this Challenger Concept unique from the rest of the 2015 models.
Advertisement

The Dodge Challenger T/A was originally introduced for the 1970 model year, and while it was a street legal package – it was designed for stock class road racing against the Ford Mustang and the Chevrolet Camaro. This new SEMA-bound Challenger T/A Concept draws inspiration from the 1970 Challenger T/A and thanks to the fact that the vast majority of the added components are borrowed from other production vehicles – this is a package that could very easily become a production reality. Along the sides, the Challenger T/A Concept wears a set of stripes that are straight out of 1970, and they fit the body lines of the 2015 Challenger perfectly. A set of matte black SRT style 20 inch wheels are wrapped in Pirelli P Zero Trofeo R high performance tires and below the matte black painted rocker sills protrudes a side exit exhaust tip on each side. With a button on the dash, the driver of the Challenger T/A Concept can redirect the exhaust flow from the normal rear exhaust tips to the side tips, which skip the rear muffler system to add a whole lot of extra grumble. Out back, the Challenger T/A Concept wears a very similar spoiler to what was found on the 1970 Challenger T/A and the lower fascia area is painted matte black to fit with the rest of the lower trim on this mean looking concept muscle car.

The Challenger T/A Cockpit
On the inside, the 2015 Dodge Challenger T/A Concept has been lightened up a bit for improved performance, including a set of Dodge Viper seats on unique aluminum tracks and the full removal of the rear seat assembly. A nice, clean looking aluminum panel system has been added to fill the gap of the rear seat while a rear harness bar allows for proper fastening of the race approved restraint system. A Mopar pistol grip shifter has been fitted to the 6-speed manual transmission while a leather wrapped flat bottom steering wheel adds more performance feel. The Challenger T/A Concept Induction System
While the 2015 Dodge Challenger T/A Concept is a gorgeous show car inside and out, the most interesting feature is the new Mopar cold air intake system. The SRT hood has an air inlet at the front, but simply hooking that opening up to the throttle body of the 392 Hemi would draw in all sorts of dirt, debris and other unwanted substances into the engine. To fix that problem, Mopar used the underhood workings of their awesome new Shaker hood scoop setup. After designing a “hat” that would fit against the bottom of the hood, the Mopar team added this new top portion to the production Shaker setup, allowing the T/A to have a fully functional air intake setup on the hood.

Could the Challenger T/A Concept See Production?
The 2015 Dodge Challenger T/A Concept is a gorgeous muscle car. I’m in love with this Challenger and I know that many of the people with whom I’ve spoken about this muscular concept feel the same way that I do. Such a great looking muscle car concept has quickly gotten people wanting to know if this car will see production and in the exact same form that I saw at the Chrysler HQ, I do not think that it will become a production car.

However, that is only because of the rear seat delete and the rear harness bar in the 2015 Dodge Challenger T/A Concept. Unless it is marketed as a pure race car, I just don’t think that Dodge will sell a Challenger with a factory rear seat delete and the harness bar. However, I fully expect to see the air intake system for the SRT hood, the chin spoiler, the rear spoiler and the exhaust system in the Mopar Accessories catalog in the near future so those 2015 Challenger Scat Pack owners who want to have a new Challenger T/A, they will be able to build it themselves. At the same time, this car looks so production ready (shy of the interior features) and the package features are really so simple that I could see the Challenger T/A – maybe even if only in limited numbers. Since it is comprised mostly of components that the Dodge brand already has in their arsenal like the hood, the headlights, the wheels and the exhaust system, there wouldn’t be a tremendous amount of development involved to make a production version of this wicked concept. Really, I think that it is only a rear seat away from being perfect for dealerships around the country.

Click here for a closer look at the 2016 Challenger T/A Concept.

CY COPENHAVER wrote on October 27, 2014 - 9:38pm Permalink
Always room for a T/A.
Clint wrote on October 28, 2014 - 11:14am Permalink
It's a Shame it's missing an actual "T/A" hood...my 2011 came with one from the factory...
Wolfgang Bergstrom wrote on October 30, 2014 - 2:16pm Permalink
The boss 302 had no back seat and bracing and was street legal and the z28 has Trofeo r tires, the t/a hood is not aerodynamically sound has a lot of drag would be a great competitor to the existing track killers like the Z28 and the upcoming GT350.
Brian Lively wrote on January 5, 2015 - 11:48pm Permalink
I agree. It should have the same hood as the one found on the Hellcat. It needs heat extractors the ensure that heat is constantly flowing outta that engine bay
erik wrote on February 5, 2015 - 9:05am Permalink
They should have built it with the Pentastar and a manual transmission to keep it more true to the original. The smaller engine would have knocked 250-300 lbs off the weight, mostly in the front end. Squeeze another 50 HP out of the pentastar, maybe 100_ and you have a perfect modern T/A.
vince wrote on June 18, 2015 - 6:14am Permalink
They already built a modern TA back in 2010. It has everything but the correct stripes and it only unfortunately came in black. It had the correct hood, rear spoiler, interior, handling package etc. It was the Mopar 10. Limited to 500 so a good car and not lots of them out there. There are a few for sale and a great car at a good price..