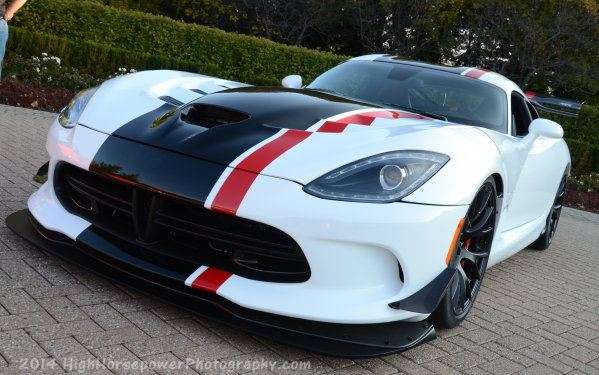 The Chrysler Group held a small press event this morning to show off some of the vehicles headed to the 2014 SEMA Show and among the crowd was the Dodge Viper ACR Concept – a show car that could and should become the next great American supercar.
Advertisement

Earlier this week, we looked at the teaser image of the Dodge Viper ACR Concept and now that I have met the car in person, it looks exactly how I would have expected. This car is a beautiful representation of what could and should be the newest American Club Racer Viper, with some visually basic yet functionally substantial additions making for the meanest looking modern era Mopar supercar. Across the front end, the Viper ACR Concept wears a serious carbon fiber splitter that extends out away from the front fascia with dry carbon fiber dive plans mounted just above the splitter, on the leading edge of the front wheel wells. Also, the standard 2015 Viper front fascia has been fitted with a set of carbon fiber ducts that feed air to the front brakes.

Along the side, the Viper ACR Concept wears a set of unique lightweight 19 inch wheels wrapped in Hoosier R6 race tires. Beyond those sharp looking rims is the highest performance braking system ever fitted to the Viper, with gigantic carbon ceramic rotors pinched between 6 piston Brembo calipers in the front and rear. There is also a simple ACR logo on the front fenders and unique venting atop each of the front fenders. Also, the aggressive stance of the ACR Concept comes thanks to a race ready suspension setup.

Out back, the ACR Concept is pretty much the same as the rest of the modern 2015 Viper lineup with the exception of the massive dual plane, carbon fiber wing that should yield remarkable levels of downforce at high speeds…just like the huge wing on the record setting 2010 Viper ACR. No More Power, Lots Less Weight
The Dodge Viper ACR Concept does not pack any additional power over the current production Viper, but the interior has been stripped of all features that you don’t need to go fast. You won’t find things like carpeting, sound insulation or a sound system, but you will find a suede wrapped steering wheel and a set of 5-point race harnesses. The Dodge Viper ACR Concept shown here is just a concept right now, but it seems that this car could be created fairly easily. After all, it is a brake package, a suspension package, unique wheels and tires, the aerodynamic bits and the removal of a few interior options. Even if Dodge doesn’t offer up an ACR trimline in the near future, it should be relatively easy for Mopar to make this car a reality through their performance parts catalog.

The company has stated that they have seen demand for a new Viper ACR, so I suspect that this will be a production model in the future. Click any of the thumbnails above for a larger collection of pictures from the debut this morning.