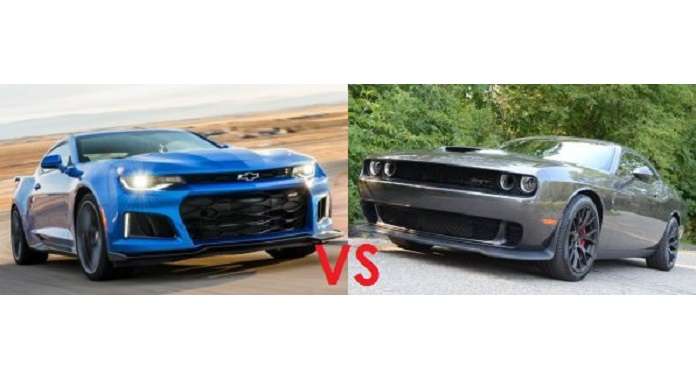 The hottest head-to-head battle in the world of the American muscle car is being waged between the 2017 Chevrolet Camaro ZL1 and the 2017 Dodge Challenger SRT Hellcat. So today we bring you a “tale of the tape” looking at how these two monster muscle cars match up on paper and, to some extent, in the real world.
Advertisement

More and more videos are popping up on YouTube showing a Dodge Challenger SRT Hellcat racing – and winning – against a new Chevrolet Camaro ZL1 on the drag strip or on a long highway run. That gives Mopar fans a chance to brag on their brawny muscle car, but Chevy fans are quick to point out that the ZL1 shines much brighter on a track with turns – and they are right.

However, since plenty of Camaro owners (both ZL1 and otherwise) spend lots of time on the drag strip, those straight-line times are just as important to most owners as the impressive road course times.

In any case, the Camaro ZL1 and the Challenger Hellcat are the two top dogs in the world of the muscle car, so today we put together a quick “Tale of the Tape”, looking at the numbers for each of these cars on a head-to-head basis.

Camaro ZL1 Power and Acceleration vs Dodge Challenger SRT Hellcat
First and foremost, the Chevrolet Camaro ZL1 and the Dodge Challenger SRT Hellcat are each powered by a supercharged V8 and mated to a standard 6-speed manual transmission, but since both cars are quicker and faster with their optional automatic transmissions – we will use all of the related numbers for the self-shifting muscle cars.

Since the Camaro is quicker to 60mph but slower in the quarter mile, it is clear that the Hellcat’s extra power allows it to pull harder through the mid-range in a race between the two supercharged muscle cars, and that mid-range pull is best displayed in the many highway roll races showing a Hellcat car beating a new ZL1.

Also, even though the Camaro ZL1 is lighter and seemingly more aerodynamic, the Hellcat Challenger has a higher top speed – although it isn’t much higher. Using the two-direction method, the Camaro ZL1 reached an official top speed of 198 miles per hour while the Challenger hit 199 using the same method.

In short, the Hellcat Challenger has more power, it is quicker in the quarter mile and it has a higher top speed when compared to the Camaro ZL1.

Handling and Braking
General Motors fans will argue that the Camaro ZL1 is a better all-around performance car and based on the braking numbers, handling numbers and real-world track times – those GM fans are correct. The Camaro ZL1 will get stopped from 60mph in 107 feet while the Hellcat Challenger takes anywhere from 109 to 116 feet depending on the outlet. On the skid pad, the Camaro ZL1 will reach cornering G forces of 1.02G while the Hellcat falls short of a full G and in 3rd party testing, the Camaro routinely beats the Hellcat on the skidpad – although it is within a tenth of a G or so.

When you compare two cars and find that one is lighter, brakes more quickly and will cut through corners harder, it is safe to assume that it will also win the race on a road course – and that is the case between the Camaro ZL1 and the Challenger SRT Hellcat. Dodge has never issued a time for the Hellcat at the Nurburgring and they likely never will, but Chevrolet turned a lap time of 7:29.6 at the famed German road course. That is, by far, the quickest time ever turned on that track with an American muscle car and we can expect that in most head-to-head road course battles between these two cars in stock form with similarly skilled drivers – the Camaro will take the win.

Finally, we come to pricing for the Camaro ZL1 and the Hellcat Challenger. When equipped with the 10-speed automatic transmission, the Camaro ZL1 has an MSRP of $65,830 including destination fees and gas guzzler taxes. The Hellcat Challenger with the 8-speed auto, destination and gas guzzler tax starts at $68,285, so the Dodge costs about $2,500 more than the Chevy in their most basic form plus an automatic transmission.

The most decided advantage in this battle comes on a curvy track, but in terms of driving on your average American road, the handling advantage of the ZL1 will be hard to realize while the straight-line advantage of the Challenger is very easy to realize every time you leave a stop light on Detroit’s Woodward Ave.

If drag racing is your thing, the Dodge Challenger SRT Hellcat is probably the better choice for you, but if you prefer a stronger handling car that costs a few grand less at the dealership, the Camaro ZL1 might be your ideal muscle car.

In any case, it is a great time to be a fan of the American muscle cars, as never before have they been this powerful or this capable in terms of road handling so whether you buy the Camaro ZL1 or the Hellcat Challenger – you are guaranteed to get a supercharged muscle car that is a blast to drive on any track.