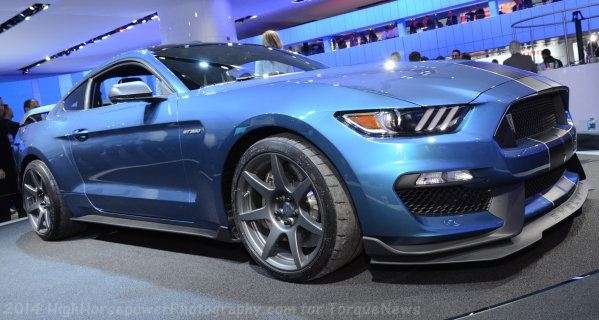 While it has not been confirmed by Ford Motor Company, a rumor floating around the internet suggests that the new Shelby GT350R Mustang has lapped the Nurburgring substantially quicker than the Chevrolet Camaro Z/28, which makes the GT350R the quickest muscle car to lap the Ring – if the rumor is true.
Advertisement

This past weekend, I saw a few posts on Facebook from questionable publications claiming that the new Ford Shelby GT350R Mustang had lapped the Nurburgring in just 7 minutes and 32.19 seconds, but these sites offered no proof of any kind. There is still no solid information from Ford to confirm that this time is real, but with more and more publications around the internet reporting this time, it is definitely something that needs to be addressed.

GT350R Laps the Ring in 7:32.19
First off, it seems that every single outlet reporting the lightning quick lap time for the new Ford Shelby GT350R Mustang at the Nurburgring claims to know a guy who knows a guy, and all of these guys claim that the newest super-Stang cruised around the Nordschleife circuit in just 7 minutes and 32.19 seconds. Should that number be confirmed, it would be the fastest lap turned by an American muscle car ever by a significant margin.

The current Nurburgring muscle car record is held by the Chevrolet Camaro Z/28. The Z/28 zipped around the Ring in 7 minutes and 37.47 seconds in the rain, which allowed it to beat the previous record holder – the Camaro ZL1. Provided that the GT350R times are real, the new Mustang is 5.28 seconds quicker around the famed German race course than the cross-town rival.

Of course, I should emphasize the fact that the Camaro Z/28’s record was made on a wet track so if the Mustang did bear the old Camaro time, the Chevy camp could almost certainly turn in a better lap in better conditions. However, the record is what it is, and if these rumors on the Shelby Mustang lap times are confirmed as true, the Camaro Z/28 will become the second quickest American muscle car to lap “The Ring” behind the new GT350R.

No Word from Ford
Unfortunately, Ford Motor Company hasn’t had anything to say about this possible record-setting Nurburgring lap time for the new Shelby GT350R Mustang, and that is what makes me question all of these early reports. If the new Mustang was able to turn a lap time at the world’s toughest road course that was quick enough to be a world record for the class – beating Chevrolet’s super-Camaro Z/28 – then why wouldn’t they have made an announcement of this historic lap?

It would be an incredible lap time, beating not only the current Camaro Z/28, but also some very impressive supercars like the 2011 Nissan GT-R, the Koenigsegg CCR and CCX, and the Ferrari 458 Italia. A time of 7:32.19 would make the new Shelby GT350R Mustang one of the fastest cars in the world on one of the toughest tracks in the world – so why wouldn’t Ford have made an official statement when this lap was run? That is the part of this story that just doesn’t make sense to me.

Ultimately, with more and more sources claiming that they have inside information that confirmed the Shelby GT350R Mustang Nurburgring lap time of 7:32.19, it seems to be a little more likely each day. However, we really can’t label the GT350R as a Z/28 killer until those numbers are made official.

Should any official announcement be made on the Shelby GT350R Mustang Nurburgring lap time, you can be sure to find more about it here on TorqueNews.com.