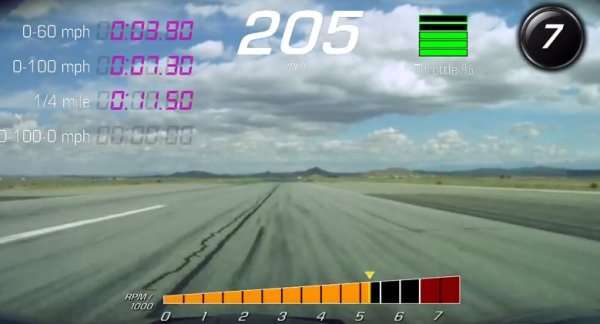 Ride Along with a Callaway Corvette Z06 Hitting 205mph

A video has hit the internet showing a new Chevrolet Corvette Z06 fitted with the Callaway SC757 package participating in a top speed event on a 1.5 mile track – hitting an awesome 205 miles per hour with the modified GM supercar.
Advertisement

The C7 Chevrolet Corvette Z06 is the most powerful, the quickest and the fastest production Corvette ever issued by General Motors, but for those folks who need more than 650 horsepower and 650lb-ft of torque, the folks at Callaway have two different high performance packages for the new Z06. In this case, the Callaway SC757 package has been applied to this C7 Corvette and as a result, the 757 horsepower supercar is capable of hitting 205 miles per hour on the 1.5 Magnum Mojave top speed track.

The LT4 V8 of the new Corvette is fitted with the Callaway GenThree supercharger featuring the company’s TripleCooled intercooler system, a high flow intake system, a high flow exhaust system and an engine tune that brings it all together. There is also a unique hood that allows the supercharger housing to poke up into the fresh air along with a collection of appearance upgrades, but the meat of the package is the intercooled supercharger, the intake system, the exhaust system and a tune – which lifts the output from 650 horsepower and 650lb-ft of torque to 757 horsepower and 777lb-ft of torque.

The owner of this particular Callaway Corvette Z06 has removed the middle section of the rear wickerbill spoiler along with the front canards, which will reduce drag as the supercharged Vette rockets down the 1.5 mile track.

The 205mph Run
The video below shows the Callaway SC757-equipped Corvette Z06 taking on the 1.5 mile track from the view of GM’s handy Performance Data Recorder. This shows us the front view and a collection of data, including the tachometer, the throttle input, the gear selected, the vehicle speed and a handful of performance parameters (0-60, 0-100, ¼ mile).

After the driver of the Corvette Z06 waits for a minute while the previous car races off into the distance, the Callaway SC757 car prepares for the run (around 58 seconds into the video). The Callaway Corvette hits 60mph in 3.9 seconds, 100mph in 7.3 seconds and it reaches the end of the ¼ mile in 11.5 seconds. More importantly, the 757 horsepower supercharged Corvette reaches an official speed of 202.3 miles per hour per the track timing system, but from the on-board system, this Corvette hits a whopping 205 miles per hour.

Finally, the on-board microphone captures the whine and the roar of the worked LT4 as this Callaway Corvette Z06 pushes past the 200mph barrier, so crank up your speakers and enjoy!