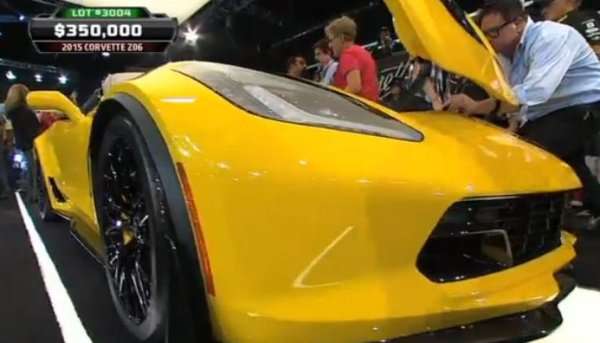 The right to own 2015 Chevrolet Corvette Z06 Coupe #1 was auctioned off this past weekend at the Barrett Jackson Auto Auction in Palm Beach, Florida and as expected, NASCAR owner and diehard Chevrolet performance fan Rick Hendrick claimed the first Z06 with a show stopping bid of $1,000,000.
Advertisement

The bidding for the first 2015 Chevrolet Corvette Z06 Coupe was fast and furious as soon as it began with the price jumping up past $200,000 within the first seven seconds or so. Around the 40 second mark, the price hit the half million dollar mark and shortly after that, the camera began showing a cutaway shot of Rick Hendrick seated in the crowd. We see Hendrick first cue his runner that he is ready to bid around the $650,000 mark and as bidding slows around the $800,000 mark, it appears as though a gentleman named Charlie might take home Z06 #001 with a $900,000 bid and when Hendrick comes back with a bid of $950k, Charlie fights back with a bid of $975,000.

At that point, Mr. Rick Hendrick gave his man the nod and confirmed his bid of $1,000,000 for the first 2015 Chevrolet Corvette Z06 which forced Charlie out of the bidding. The auctioneer quickly celebrated the million dollar bid and sounded the final gavel on the charity auction for the first C7 Z06 Coupe. It really is an exciting video so if you have two minutes to kill, it is definitely worth the watch.

As is always the case, Rick Hendrick didn’t actually get to leave the Palm Beach auction with the 2015 Corvette Z06 Coupe that is shown in the video below, as that is a preproduction model used for the Detroit debut and other auto shows around the country. When production of the 2015 Corvette Z06 begins later this year, Mr. Hendrick will get to configure Z06 #001 in any way that he likes, including interior color, exterior color, manual or automatic transmission and any applicable options.

It will be interesting to see if Hendrick picks the 7-speed manual or the new 8-speed automatic as, while the manual seems like the obvious choice, this is an instant collector’s piece and with the 2015 Z06 being the first modern super-Vette to offer an automatic transmission – the automatic may actually have some increased collector’s value.

The recent news that General Motors will soon offer the 2015 Chevrolet Corvette Z06 Convertible means that there will likely be another “first” Corvette rolling across the auction block in the near future – and I would say that Rick Hendrick is the early favorite to take home the first modern topless high end Corvette.