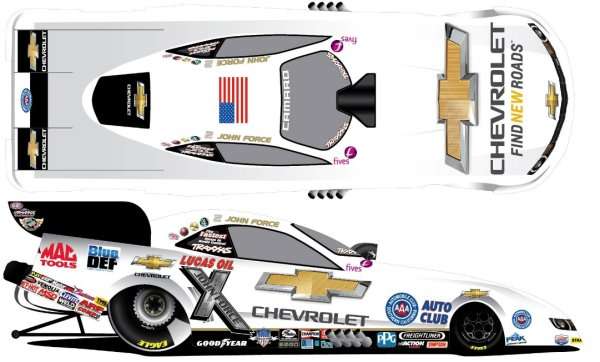 The John Force Racing team has had a tough 2015 NHRA season in their new Chevrolet Camaro race cars, but when Force arrives at the Four-Wide Nationals this weekend in Concord NC, his Camaro SS funny car will have a new Chevrolet-branded livery – hopefully bringing with it some luck for Force and his team.
Advertisement

Leading up to the 2015 NHRA season, the biggest news was that Chevrolet was returning to the drag racing big leagues with the help of John Force Racing. After spending years dominating the funny car class with a Ford Mustang, John Force and his teammates Courtney Force and Robert Hight all made the jump to a Chevrolet Camaro body for 2015 when Ford pulled their factory support. This was huge news for the drag racing world and Chevrolet fans alike, but thus far, John Force Racing fans haven’t had much to cheer about.

John Force, Courtney Force and Robert Hight have all been quick in their Camaro funny cars this season, but they haven’t been able to pull down their first event win of the 2015 NHRA season. However, John Force will unveil a new car design this weekend at the Four-Wide Nationals at Charlotte’s Z-Max Speedway and while this new look won’t make the car any faster, the racing legend is likely hoping for a change of luck for himself and his two teammates.

The New Look
The 2015 Chevrolet Camaro SS funny car debuting this weekend at the Four-Wide Nationals with feature Chevrolet as the primary sponsor, with a massive gold Chevy bowtie and the Chevrolet font logo on the sides and “hood” area of the race car. There is also a smaller Chevy bowtie on each side of the rear wing, above each rear wheel opening and on the back window, so there is no mistaking who is sponsoring this Camaro SS funny car. The other key sponsors including Peak Antifreeze, BlueDef, Auto Club, Traxxas, Lucas Oil and Mac Tools will still have their logos on the car, but for the Four-Wide event – Chevy is front and center.

John Force will also be wearing a new Chevy branded race suit and helmet this weekend.

“I am excited to be racing this Chevrolet-branded Camaro SS Funny Car this weekend. This season we will have a number of different looks on my Funny Car, and it is all about keeping the sponsors happy,” said John Force. “Last weekend I felt like I was back with my roots when we were at the NASCAR race [the Auto Club 400 in Fontana, Calif.]. We were representing Auto Club, and we got to talk with their driver Joey Logano for a few minutes. It was also great to see stars like Jimmie Johnson and [Dale] Earnhardt Jr. We talked about all being in the Chevrolet family now and how cool it was to be on Team Chevy.”

Four-Wide Nationals
If you are not familiar with the Four-Wide Nationals or Z-Max Speedway, it is like any other drag racing event, except there are four racing lanes instead of two. This allows the cars to race four at a time down the track, hence the name of the event. Force and his team have a ton of experience at the unique track, with John having won the first Four-Wide Nationals and last year, Force finished second to teammate Robert Hight.

Considering how quick the John Force Racing Camaro SS funny cars have been this season, a little luck and their history of success could be just what the team needs to get Chevy its first funny car win in years.

abbey castro wrote on March 27, 2015 - 9:12pm Permalink
There is probably not one GM component in the whole car! If you find at least one, what page is it in the GM Performance Parts Catalog? The only difference between his old Mustang and the "new Camaro" is the decals and who pays the bill. Does anyone remember when the logo on the fender was what was under the hood,, oops what hood? Guess this is progress into the next decade.