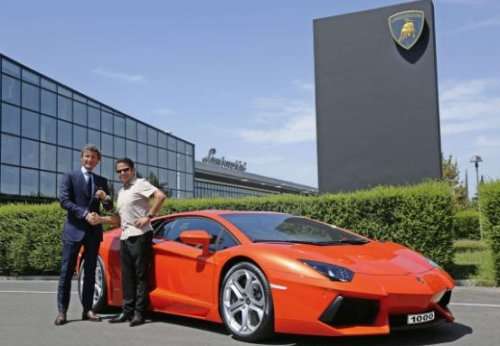 The Lamborghini Aventador hit a major milestone this week as the Italian automaker built the 1000th example of their newest supercar after just 15 months in production.
Advertisement

Lamborghini Aventador number 1,000 was finished in the gorgeous Argos Orange and is headed to Germany with new owner Bavarian architect and Lamborghini enthusiast Hans Scheldecker. When it reaches its new home, the 1,000th Aventador will share a garage with Scheldecker’s Lamborghini Diablo. Scheldecker received the keys to his new Aventador today directly from Lamborghini President and CEO, Stephan Winkelmann (the car, the new owner and the company CEO are shown in the image on the right).

While reaching 1,000 production unit is an impressive feat for any supercar with a price tag of $376,000 (MSRP), the most impressive portion of this achievement is the length of time in which the Lamborghini Aventador has hit this milestone production mark. The Aventador went on sale about 15 months ago, giving the company an average of roughly 66 Aventador coupes sold each month since then. This rate of 66 a month leads to roughly 792 a year which - with the 376k price tag – means that the Italian automaker is raking in roughly $297,792,000. Yeah, almost $300 million annually from a single model.and who said the economy has been bad?

For comparison, the Lamborghini Aventador replaced the Lamborghini Murciélago, which took almost three years to hit the 1,000 unit mark. The Murciélago ran for nine years, moving a total of 4,099 units – an average of roughly 37 cars sold per month. This means that if the Aventador continue on with this pace, it will surpass the Murciélago in just over five years. You have to question whether or not the impressive sales rate of the Aventador will continue over the next year with the financial troubles across Europe but there is no question that this new supercar has a great start in becoming one of the bestselling Lambos of all time.

The bestselling Lamborghini of all time is the current Gallardo with almost 12,000 units sold since entering production in 2003 as a 2004 model year vehicle. Like the Murciélago, the Gallardo is due to be replaced very soon so it will likely also see its end sales results come from nine years of production. 12,000 units in 9 years equals roughly 1,333 units a year which is roughly double the current pace of the Aventador. It could be tough for Lamborghini to double the rate at which the Aventador is selling but with an open air roadster on the way along with the possibility of future higher performance models – it is hard to say how well the Aventador will sell during its lifetime. Then again, it should also be noted that with a starting price around $181,000, the Gallardo costs less than half as much as the Aventador so that sales comparison isn’t a fair one for the Aventador.

The Lamborghini Aventador is built at the company’s Sant'Agata Bolognese production facility and since beginning production in the third quarter of 2011, daily production has increased by 50% from the original figure of three vehicles per day to 4.5 vehicles per day. This increase is important as the company has already received enough advance orders for the Lamborghini Aventador to account for the next 18 months of production. Based on the high rate of demand and the gradual increase in daily production, the Aventador’s sales figures could continue to grow but with a waiting list that is over a year long – it would be a good idea to place your order right away if you have the required $376,000 to purchase this incredible new Italian supercar.

Our congratulations to the folks at Lamborghini for reaching this impressive milestone with the Aventador so quickly and here’s wishing the company many more units sold over the life of the Lamborghini Aventador.

Tesla Contemplates A New Strategy for China Retail even As Sales Boom
Jay Leno on Elon Musk & EVs: “I Think He Should Get ... Credit"
END_OF_DOCUMENT_TOKEN_TO_BE_REPLACED