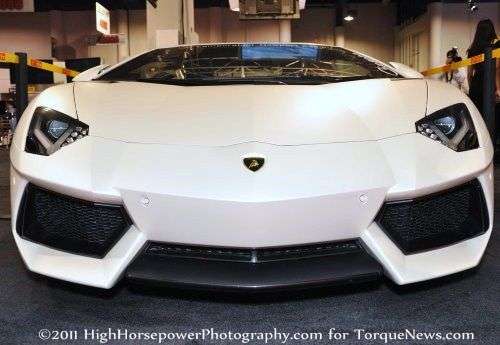 The Lamborghini Aventador LP700-4 is one of the greatest full production models of all time from the storied sports car builder and in the great tradition of Lamborghini supercars; rumors suggest that the company will unveil a roadster version of the Aventador LP700-4 at the 2012 Geneva Motor Show.
Advertisement

When you look at the recent history of the Lamborghini brand dating back to the early 1990s, all of the supercars to wear the prancing bull (Murciélago, Gallardo, Reventon, Diablo) have offered a topless model so it should come as no surprise that the awesome new Aventador LP700-4 will get an open-air version of its own. The Italian automaker hasn’t officially confirmed anything but the internet is abuzz with rumors that the Aventador Roadster will show itself at the Geneva Motor Show in the spring of 2012. We found out from a slightly more official..yet not at all official source when information on the Aventador Roadster popped up on the US government's EPA Website (click here for more on that).

The Lamborghini Aventador LP700-4 is powered by a 6.5L V12, pumping out 691 horsepower and 510lb-ft of torque to all four wheels via Lamborghini’s advanced all wheel drive system – affording the current production model of the Aventador Coupe to rocket from 0-60 in under 3 seconds while reaching a top speed of 217.6 miles per hour. Unfortunately, the Aventador only offers around 14 miles per gallon but the odds are good that very few Lambo owners ever think twice about the fuel economy of their Italian supercar. We can expect that the Aventador LP700-4 Roadster to feature the same drivetrain and output with similar performance capabilities. The Roadster will likely also pack the same 7-speed automatic transmission that we get in the Aventador Coupe that reduces the shift time to around 50 milliseconds to rip from one gear to the next.

The sharp, angular styling of the Lamborghini Aventador LP700-4 Coupe is similar to that seen by the super exclusive Reventon Coupe, which also saw a limited run of 20 units made of a Roadster version. The look of the Aventador will very likely lend itself very smoothly the Roadster alteration – and the odds are better than not that the Aventador Roadster will be just as awesome as the hardtopped version when it hits the streets.

One interesting aspect to the possible introduction of the Lamborghini Aventador Roadster relates to the intended build quantity of the Aventador Coupe. When released, Lamborghini announced that just 4,000 Aventador models would be built and if a Roadster version is unveiled, we wonder if the topless models will be lumped into that 4,000 unit figure or if there will be 4,000 Aventador Coupes and a to-be-announced number of Aventador Roadsters being independent from the planned quota of hardtop models.

You can click here to head on over to TeamSpeed.com, where they even have a look at the topless version of the Lamborghini Reventon LP700-4.

LG's New EV Battery Plant Is a Welcome News for Tesla
Tesla Giga Berlin's New Hurdle: It's Not Only the Gov't, but Now Tesla Itself
END_OF_DOCUMENT_TOKEN_TO_BE_REPLACED