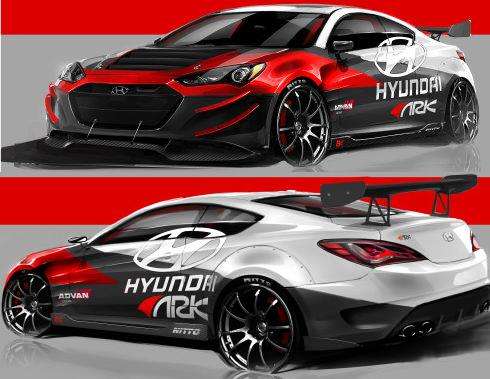 The start of the 2012 SEMA Show in Las Vegas is 36 days away and Hyundai has struck as being the first automaker to tease one of their special 1-off SEMA Show builds with a first look at the 2013 Hyundai Genesis 3.8 R-Spec modified by ARK Performance to pack almost 400 horsepower and an aggressive, unique look.
Advertisement

The 2013 Hyundai Genesis 3.8 Coupe R-Spec Super Tuner Track Edition (click here for the TorqueNews review of the Genesis 3.8 R-Spec) built by ARK Performance begins under the hood, where the standard direct injected 3.8L V6 has been heavily modified inside and out to produce 395 horsepower and 340lb-ft of torque. To reach this output, ARK pulled the 3.8L Lambda V6 out and tore it down – adding a Brian Crower 4.2L stroker kit including a BC 4340 crankshaft, BC 4340 connecting rods and JE Pistons. An ARK Performance intake system, ARK Performance ceramic coated headers, and an ARK Performance lightweight pulley kit are fitted to the outside of the new 4.2L V6 while an ARK performance oil cooler helps keep this high performance V6 running smoothly.

Helping putting all of that power to the ground in the ARK Performance super-tuner track edition of the 2013 Hyundai Genesis Coupe is a carbon plate clutch kit and a dual mass flywheel from ARK , a Cusco type RS 1.5/2-way limited-slip differential and lightweight Yokohama ADVAN RS2 wheels wrapped in Nitto NT05 tires. Working to insure that the ARK Performance Genesis Coupe handles as well as it accelerates, ARK has added a six piston big brake kit in the front and rear with ARK carbon brake pads and ARK stainless steel brake lines along with an ARK Performance DTP coil over system featuring Cusco suspension bars, arms and control rods.

Since a car cannot stand out at the 2012 SEMA Show with go-fast mods alone, ARK Performance had added a substantial body kit to give this Gen Coupe a unique look. The exterior features an ARK-ADRO carbon fiber hood, an ARK-ADRO rear diffuser, ARK performance SFX rear fender flares, an ARK performance CFX carbon deck lid and an APR GT300 carbon wing – along with an eye catching paint scheme that is sure to draw spectators into the Hyundai display among the crowded SEMA Show floor.

Hyundai has become one of the most active automakers at the SEMA Show and with a combination of the momentum of the Korean automaker in the performance world combined with what is the first of what will likely be an impressive collection of show vehicles at the SEMA Show – we should only expect to hear about more hot Hyundai models headed to the SEMA 2012. As always, TorqueNews will be in attendance to cover the show so you can expect to see more teasers leading up to the October 30th launch of the event.