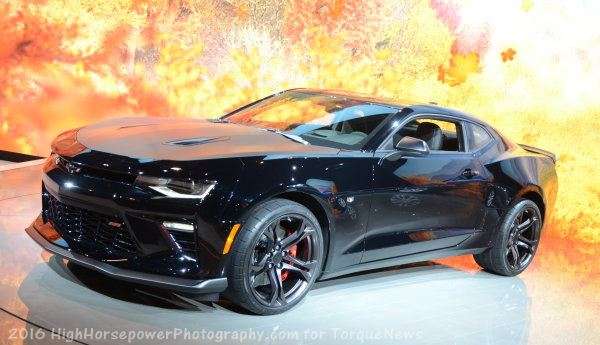 General Motors had initially stated that the 6th generation Chevrolet Camaro would not be produced in right hand drive, but while speaking with the Australian site CarAdvice, it looks like the automaker is reconsidering a Camaro built for right-drive markets.
Advertisement

When the 2016 Chevrolet Camaro debuted, there was no mention of a right hand drive model and there had been insider sources who insisted that GM wasn’t working on a right-drive Camaro Six. Ahead of the 2016 Camaro debut, it was expected that the early popularity of the new Ford Mustang in a right-drive configuration would lead to a right hand drive Camaro – thus sparking a proper battle of the muscle cars in Australia. Unfortunately, the total lack of information about a Camaro for the Aussie market led GM performance fans Down Under to wonder what the future would hold in terms of new performance cars in their local showrooms.

Based on a new report, it seems that there is a chance that the Australian market could get a right hand drive Camaro, but only if GM sees enough demand over an extended period of time.

Oppenheiser Talks to CarAdvice
At the ongoing New York International Auto Show, CarAdvice caught up with Chevrolet Camaro chief engineer Al Oppenheiser and asked him about the possibility of a right hand drive variant for applicable markets. The Camaro boss explained that the company is considering a right hand drive Camaro for markets including Australia, but only if there is a chance of continued demand in those markets – which they are currently studying. GM knows that there are prospective buyers in Australia, but are there enough year after year to support the expense of engineering a factory-built right hand drive Camaro?

The new Ford Mustang is the first to be built in right-drive configuration and as a result, sales have exploded in Australia. The allocation of RHD Mustangs headed Down Under is officially sold out into the 2017 calendar year, so there is obviously great demand, but GM wants to see if this interest continues once the initial rush has been satisfied. There is a chance that once this long initial list of Mustang buyers has been handled, the demand for both Mustangs and for RHD American muscle cars will decline dramatically. While we would like to think that the people buying Mustangs and the people buying Camaros are two distinctly different groups, but they are not. There are obviously Ford fans and Chevy/GM fans, but plenty of people who buy one of them could have just as easily purchased the other. If the new Mustang has satisfied many of those non-brand loyal buyers, there could be a much smaller demand for the new Camaro.

GM is likely watching the Ford Mustang sales numbers in both Australia and the UK, and if the Motor Company can post consistent sales numbers in those markets, there is a better chance of seeing the Camaro offered in right hand drive.

So, if you live in Australia or the UK and you have been dreaming of putting a new right hand drive Chevrolet Camaro in your driveway, make sure to let your local dealership know. Post on social networks telling GM to bring the Camaro to your local market and, oddly, hope for the Ford Mustang to continue selling well in right hand drive markets – as continued success for the Mustang will lead to a right hand drive Camaro.

Philippe wrote on June 11, 2016 - 12:19pm Permalink
When are we getting Camaro right hand drive
Luc Janssens wrote on August 11, 2016 - 4:23pm Permalink
Isn't the Camaro based on a shortened Holden platform? And if so I'm sure a lot of the hardware is already there....just sayin'
Marshal Hepi wrote on August 15, 2016 - 10:36pm Permalink
Please GM I would Love to own a Right Hand Drive Camaro. What a Magnificent car to Drive Please GM
Magix666 wrote on November 12, 2016 - 7:21am Permalink
I would love to buy Right Hand Drive Camaro ....GM please build it and start sale of it in UK :-)
paul merigan wrote on November 14, 2016 - 4:54am Permalink
I am 66 years old and would order a Gm Camaro tomorrow if available
Rob wrote on January 12, 2017 - 1:10am Permalink
I second that.
Charlie Busuttil wrote on July 17, 2017 - 1:50am Permalink
Hi Mr GM, All due respects, you have invested a lot of energy developing a far better muscle car in your current model Camaro than Ford's equivalent in their Mustang. Your local US market has already proven itself. Currently it is Camaro's 50th anniversary and it is coinciding with Australia's biggest mistake in history to stop manufacturing GM Holdens on our shores as of October 2017. So there is no better time to introduce a right hand drive GM Camaro in Australia. Seriously, what are all the dedicated GM people living in Australia supposed to do?? Suddenly start buying Fords or even worse than that, start buying European or Japanese cars ?? Meanwhile GM in US is watching and studying the Australian market trend.. Don't take too long studying the market that is desperately waiting because before too long the Australian market will loose interest in GM products if they only see them in American film industry, rather than hear and feel them and their roar of a genuine GM 6.2 litre pull away into the distance on the highways... So please consider my point of view and please hurry up and send us the 2017 "right hand" drive Camaro at an affordable retail price .. Yours sincerely Charlie Busuttil
Chris wrote on July 29, 2017 - 1:25pm Permalink
I refuse to buy any other car until they realise there is a huge market for these cars in the UK as well as Australia and we need them in RHD!! Pleeeeeease! I don't want to die without owning one!!!