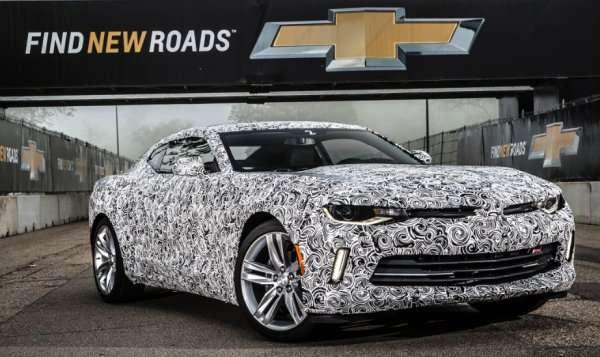 The 2016 Chevrolet Camaro looks primed and ready to compete with the new Ford Mustang here in the USA, but in the global muscle car war, the 6th gen Camaro will have a hard time competing with the Mustang without the right hand drive configuration that is needed in many markets.
Advertisement

Over the past few years, the Chevrolet Camaro has been the leader in global sales of American muscle cars because the Ford Mustang wasn’t directly marketed by Ford Motor Company outside of North America. However, when Ford announced that they 2015 Mustang would be offered with a right hand drive configuration, it was clear that the Motor Company was looking to make a run at the global muscle car sales title as well as the US title.

Unfortunately, reports from all over the world from inside sources insist that the 6th gen Camaro will not be offered with a right hand drive configuration.

No RHD Rumors Last Year, Reports Now
Back in November 2014, we brought you the news that a General Motors insider claimed that there was no right hand drive 2016 Camaro planned. The information seemed solid, but with the early popularity of the 2015 Ford Mustang in right hand drive markets, it seemed unlikely that GM would really snub some of those large foreign markets.

However, since the 2016 Chevrolet Camaro debuted last month in Detroit, there have been more insider reports from sources around the world insisting that there is still no right hand drive Camaro Six in the works. The Camaro will almost certainly be sold in many of the same markets as the Mustang, but should these reports be true, I would expect to see the Camaro offered in less RHD markets – particularly skipping those smallest RHD regions.

If True, I’m Stunned
The reason that this comes as such a surprise to me is that the new turbocharged 4-cylinder engine in the 2016 Chevrolet Camaro seems like it was designed specifically for the overseas markets where fuel prices are very high and where a large engine comes with massive taxes at the point of purchase. This is one reason why the Camaro hasn’t done better in Europe, as the only engine offered abroad is the 6.2L V8 from the American SS package. This engine is awesome, but it makes the Camaro unaffordable for many prospective buyers and the 3.6L V6 is too big to satisfy many of the engine size restrictions in those markets.

In order to make the 2015 Ford Mustang more acquirable in these foreign markets, Ford introduced the new 2.3L EcoBoost and surprisingly to many, GM countered with a new turbocharged 2.0L mill for the 2016 Camaro. With far less power than the Mustang EcoBoost or even the new V6 Camaro, it seems like this engine is ideal for foreign markets – making it clear that GM wants to compete with the Mustang on a global level.

On the other hand, should GM really snub the right hand drive markets, sending the 2016 Camaro around the world strictly as a left-drive model, they will be giving the Mustang a very big advantage in some large markets.

For the sake of those hopeful buyers in the right hand drive markets, I am kind of hoping that these insider reports prove to be incorrect, as a right hand drive 2016 Camaro would turn up the heat in the global muscle car sales race and in a battle like this – the consumer is the real winner.

Peter wrote on June 17, 2015 - 10:51pm Permalink
Let there be no confusion here. General Motors has unashamedly shafted Australia. They took over the Australian car manufacturing company Holden some years ago and when sales started dropping under their ownership they decide to pull the pin entirely on Australian car manufacturing, leaving Australia with no car manufacturing capability from 2017/18. This came despite the fact that Holden was in fact consistently less unprofitable then General Motors North America. Of course GM would not consider shutting down operations in the USA, but shutting the Australian car industry was of course a matter of little concern for them. To add insult to injury they have now decided to deprive Australians of the Camaro due to the fact it will not be manufactured in RHD and LHD vehicles cannot be legally driven on Australian roads unless the vehicle is 15 to 25 years old. Therefore the much loved rear wheel drive V8 market may consist solely of Ford Mustangs from 2017. General Motors have absolutely destroyed the Australian car manufacturing industry and I call upon all Australians to boycott their products, including Holden products.
bob wrote on July 2, 2015 - 1:13pm Permalink
Holden has been owned by GM since 1931. Do you really expect them to continue losing money in Australia. Maybe you should turn your misguided anger towards your government who has allowed Australia to become so uncompetetive in global manufacturing, believing that selling dirt and houses to foreigners would be a viable alternative.
Kikaijikake no wrote on June 18, 2015 - 1:38pm Permalink
most of europe has the same driving side as the US, so the big players that would buy RHD would be UK, AUS, and japan and with AUS high taxation laws you barely see any new cars down there so i doubt the stang will sell there well. so they aren't missing out on much. dont worry i know they're more countries that have RHD i was mentioning the main mass market buyers.
Peter wrote on June 20, 2015 - 7:05am Permalink
General Motors not missing out on much? How about respect? And even if GM are not missing out on much the same surely can't be said for 220 million Australians, Japanese and Brits who miss out on the Camaro. By the way, at last count there are 2000 deposits on the Ford Mustang in Australia alone and it's not due for another 6 months yet. Someone buy Mark Reuss an abacus and if he got himself an Australian passport when he was managing director of Holden take it back.
royce wrote on June 28, 2015 - 3:27am Permalink
There is a huge new car market in Australia. The lack of tarriffs has opened up a huge variety of manufacturers and modela available here. Ford has basically ignored their locally built Falcon and doesnt even advertise on local media platforms. GMH with their commodore.variants are still selling their products reasonably wel. However the biggest sales are predominately 4wd sports utility vehicles, which ultimately have robbed the tradiional rear.wheel drive six cylinder aussie.made products. The camaro designed originaly in Australia (do some research) has a good following here but alas GM dont give a toss. Now.we will be left with their cheap and nasty Daewoo Korean buily.GM products and Opel cars
Peter wrote on June 29, 2015 - 10:25am Permalink
Of course they don't give a toss GM was a catastrophic wrecking ball to the Australian nation. Quite correct a lot of the Engineering for the Zeta platform which underpinned the 5th gen Camaro was performed in Australia. Of course we never got to actually see the car and again your right we can no doubt expect an unsightly monstrosity for the Commodore replacement which GM would never dream of selling to their own people. That's because they know what backlash they would receive yet they are quite willing to hock off their second rate hand me downs to Australians whom they have taken for granted one too many times.
Philippe Faloci wrote on August 31, 2015 - 6:45am Permalink
i have a 2010 SS camaro rhd in melbourne l 99 engine and Holden and GM will bring a V8 coupe in 2017/2018
joseph blough wrote on January 21, 2016 - 5:20pm Permalink
This is just another direct injected, cylinder deactivation bomb waiting to be serviced. Who cares?