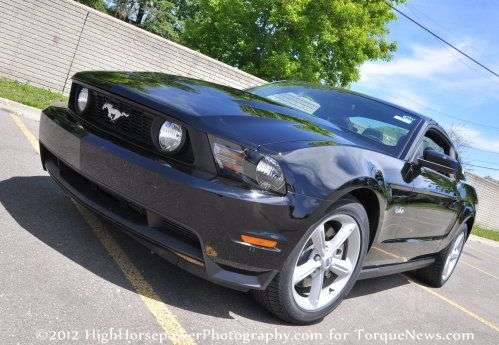 The National Highway Traffic Safety Administration has announced a new recall of select Ford F150, Ford Mustang, Ford Expedition and Lincoln Navigator vehicles over a concern that the automatic transmission may not go into reverse or when in reverse, the backup lights will not come on – posing a threat to other motorists and pedestrians alike.
Advertisement

This new Ford automatic transmission recall pertains specifically to 2011-2012 Ford F150 pickups, 2012-2013 Ford Mustang coupes and convertibles and the 2012 Ford Expedition and 2012 Lincoln Navigator full size sport utes that share a common platform and drivetrain – all of which are obviously fitted with Ford’s 6-speed automatic transmission. In total, this new recall affects around 10,500 vehicles. The NHTSA bulletin doesn’t go into detail on specific build dates for the vehicles or automatic transmissions but considering the incredible number of Ford F150 pickups produced and sold in 2011 and 2012 (Ford sold almost 2,000 F Series trucks PER DAY in April 2012)…it is very obvious that only a small group of vehicles are included in this recall.

In the Ford F150, Mustang, Expedition and Lincoln Navigator models affected by this new recall, the transmission range sensor (TRS) may be calibrated out of specification for the reverse gear. Because of this possible incorrect calibration, the vehicle may not shift into reverse when prompted by the driver and in some cases; the vehicle could go into reverse but the backup indicator lights will not illuminate. This puts the various trucks, sport utility vehicles and Mustangs in violation of multiple Federal Motor Vehicle Safety Standards including No. 102 “Transmission shift level sequence, starter interlock and transmission braking effect” and No. 108 “Lamps reflective devices and associated equipment”.

The symptoms of this new Ford F150 and Ford Mustang automatic transmission recall can create an obvious headache for drivers who find themselves suddenly unable to shift into reverse but the second portion of the recall warning can pose a significant threat to other drivers and pedestrians around the affected vehicles. When the Mustang, F150, Expedition or Navigator shift into reverse and the backup lights do not light up – other drivers in the vicinity and those walking around the vehicle may not be aware that it is in the process of backing up. Situations like backing out of a space in a crowded parking lot or trying to parallel park along the side of a busy city street without the backup lights indicating that the vehicle was backing up can clearly become an issue for everyone around. On top of that, since these 10,500 vehicles do not conform to the Federal Motor Vehicle Safety Standards, that is all that the NHTSA and automakers doing business in American need to issue a recall like this.

This new Ford F150, Mustang, Expedition and Lincoln Navigator recall is set to officially begin on June 25th 2012 at which point owners will be asked to return to their local Ford Motor Company dealership for repairs. Once there, a technician will inspect the transmission range sensor and replace it as needed. This work will be done free of charge to the owner.

If you own a 2011-2012 Ford F150 pickup, a 2012-2013 Ford Mustang coupe or convertible, a 2012 Ford Expedition or a 2012 Lincoln Navigator and you are concerned about your vehicle possibly being affected by this recall; you can check to see if your backup lights are working by having someone stand to the rear-side of the vehicle and shifting into reverse. If the vehicle shifts into reverse and the backup lights illuminate – your vehicle is functioning properly for now. This doesn’t mean that you will not get a recall notice but in the event that you do; it is always a good idea to make the trip to the dealership for the free service.