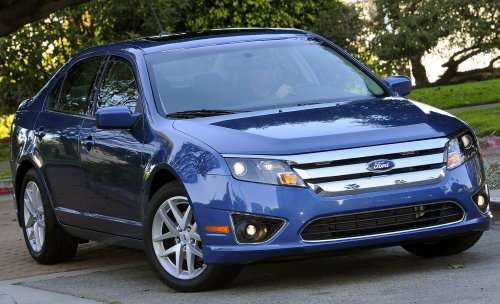 Ford Motor Company has issued a recall of over 128,000 Ford Fusion and Mercury Milan sedans over a concern that the wheel studs may break, allowing the wheel to separate from the vehicle.
Advertisement

The National Highway Traffic Safety Administration has announced that Ford Motor Company will recall select Ford Fusion and Mercury Milan sedans from the 2010 and 2011 model years, with 128,616 vehicles included. These vehicles are equipped with a 17” steel wheel design that may cause excessive force on the studs that hold the wheel onto the car and over time; that force can cause the wheel studs to break. Once one of these studs breaks, the pressure on the others is increased which can cause the rest of them to break over time. If this problem is left unattended, a wheel could come free of the vehicle while the car is in motion – very clearly presenting a serious risk to the occupants of the troublesome Fusion and Milan sedans but also those on the road around them.

The route of the problem causing Ford to recall the 128k+ 2010 and 2011 Fusion and Milan sedans is the mounting pad on the rear of the steel wheel, which Ford believes are “faulty”. Ford also believes that on some of these recalled Fusion and Milan models, the rear wheel mounting surface may not have been properly assembled when, combined with the problematic steel wheel construction, can increase the likelihood of a wheel separation while driving.

The NHTSA first opened an investigation into the issue with 2010 and 2011 Ford Fusion and Mercury Milan sedans in January 2011, after receiving a handful of complaints about failing wheel studs. Overall, the NHTSA has received 29 complaints relating to this problem and in six cases, a wheel has come off of one of these cars while driving. Five of those reported cases saw a rear wheel separate from the vehicle while the other one saw a front wheel removed – with the front wheel being the much more severe issue as it would become very difficult to control the vehicle when losing one of the wheels that steers the car. The good news is that in these incidents, there have been no injuries.

It should be pointed out that condition explained in this Fusion and Milan recall notice is the type of issue that a driver/vehicle owner should be able to recognize on his or her own. In my years of working with automobiles, I have seen a variety of vehicles break wheel studs but it never happened all at once with the exception of a very high speed accident or a drag car with 1,000+ horsepower. Owners of these models should take a look at all four wheels, just to make sure that all of the studs still appear to be in place. It is very hard for the average Joe Carowner to be able to see if the wheel is mounting correctly or if the studs are cracking – but if they are missing, anyone fit to drive should be able to see that and know that something is wrong.

Ford will begin contacting the owners of the 128,616 affected Ford Fusion and Mercury Milan sedans in January, at which point owners will be asked to return to their local dealerships where the wheel studs will be replaced on all four wheels. The dealership with also inspect the mounting surface of the 17” steel wheels and the rear braking assembly to ensure proper mounting and mounting capabilities. In short, the mechanic will look over the whole wheel assembly to make sure that the wheel studs won’t break…so the wheels won’t fall off.

(Note: the car in the image on the right would not be included in this Fusion recall, as it does not have steel wheels – it is just a nice looking picture of the car courtesy of Ford.)

Tom wrote on December 13, 2011 - 8:50pm Permalink
I owned a 1998 Ford Windstar and at 69,000 miles the right front wheel came off as I was driving. I had vibration for a few miles before the “incident” but nothing looked out of the ordinary. I thought I had a bad brake rotor. All 5 wheel studs sheared off and amazingly nobody was hurt. I filed a complaint with NHTSA, as did over 1600 other Windstar owners, but when I called Ford I was told by a Ford lawyer it was my fault for either over- or under-tightening the lug nuts. The problems went away with a change in the van model year. These current problems are exactly the same as the problems I had. See http://www-odi.nhtsa.dot.gov/defects/ and do a search for 1998 Windstar wheel/lug nuts. Incidentally, when I retrieved the wheel the next day (in a ditch), all 5 lug nuts were still firmly attached to the wheel studs, the problem was that they were lying in the plastic wheel hubcap in a ditch and not on the car: the lug nuts looked just like they should from the outside. The problem in the late ’90′s and today is an unexpected stress placed on the wheels that Ford has not isolated; a recall will not solve the problem.