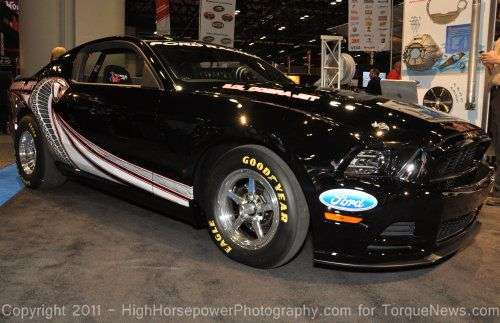 The Mustang Cobra Jet has become one of the most successful names in factory-built drag cars in motoring history and at the 2011 Performance Racing Industry, Ford Racing rolled out the newest stock drag package in the form of the 2013 Mustang Cobra Jet with a pair of new engines and a handful of other features that could make the Cobra Jet even more dominating in the world of stock eliminator racing.
Advertisement

Since being introduced in 2008, the Ford Mustang Cobra Jet (FR500CJ) has been updated twice - in 2010 and 2012 but that didn’t prevent the 2013 Cobra Jet from getting more revisions beginning with the new external design that has been displayed over the past few weeks with the 2013 Mustang V6, GT and Boss 302. This includes a front fascia similar to what we have seen on past Shelby GT500 Mustangs and out back, there are new segmented taillights but the new look is the least exciting alterations to the 2013 Cobra Jet.

The big news for the 2013 Ford Mustang Cobra Jet drag race package is the long awaited arrival of the 5.0L Coyote V8 - which is available in both naturally aspirated (N/A) and supercharged versions. The N/A 5.0 comes with Cobra Jet specific high lift camshafts, a Cobra Jet induction system, CNC ported cylinder heads, a low drag accessory drive (that will yield more wheel horsepower) and a engine block itself is bored .060 over - increasing the overall size of the new 5.0L V8 roughly 12 cubic inches. The supercharged 2013 Mustang Cobra Jet begins with the 5.0L Coyote V8 engine and adds a Whipple/Ford Racing 2.9L supercharger, a set of high flow cylinder heads and a unique intake manifold, both of which have been CNC ported to offer the ideal flow for the blower, and a multi-position accessory drive that works with the belt driven supercharger. Unfortunately, Ford hasn’t offered an exact horsepower rating for either of these 5.0L V8 engine options but we can bet that they will both easily offer more than the 412 horsepower produced by the standard production version found in the Mustang GT. Readers should keep in mind that the supercharger package offered for the current Mustang GT makes 624 horsepower with a smaller 2.3L Whipple blower - so the sky is the limit for the massively modified Coyote in the 2013 Cobra Jet.

Once the power plant of the 2013 Mustang Cobra Jet was taken care of, Ford Racing turned their attention to the rest of the car, beginning by lightening up the body and adding a revised roll cage setup that improves chassis rigidity which in turn improves the Cobra Jet’s ability to launch. Next, the 2013 Cobra Jet features a new suspension design that is expected to further improve launches that underwent hundreds of quarter mile passes to ensure that it was the best possible design for the 2013 Cobra Jet. Ford also equipped the 2013 Cobra Jet Mustang with a specially tuned electronic power steering system that allows for supreme control sans the parasitic loss of a traditional belt-driven power steering system.

One of the most interesting pieces of news around the Ford Racing-built 2013 Mustang Cobra Jet is the fact that in naturally aspirated form, the new factory racing package is less expensive than the prior 5.4L models, with a starting price of $86,000 while the blown version will set you back around $93,000. The bad news is that, like previous Cobra Jet Mustangs, the 2013 FR500CJ does not come with a VIN so there is no possibility of (legal) street use and also like previous Cobra Jets, only 50 examples will be made so if you want to pilot a factory-built Mustang stock eliminator race car next year - you had better contact Ford Racing soon. The good news is that Ford has previously shown how to take your standard Mustang GT and convert it into a 5.0L-powered Cobra Jet racer. I have been lucky enough to see Detroit-based racer Bill Barnes’ incredible Cobra Jet replica which began its life as a Mustang GT and his custom built Cobra Jet has been using the 5.0L V8 and a flurry of Ford Racing goodies to scream down the quarter mile around the country for some time now (click here for a closer look at Bill‘s Cobra Jet Mustang from the 2011 Detroit Autorama with the rest of Team Detroit Racing). However, if you have a cool $90-100k laying around and you don’t want to go to the trouble of building your own Coyote-powered Cobra Jet - Ford Racing has you covered with the 2013 Mustang Cobra Jet.

Check out our gallery of the 2013 Mustang Cobra Jet featured at the 2011 PRI show in Orlando and stay tuned to TorqueNews for all of your automotive news!