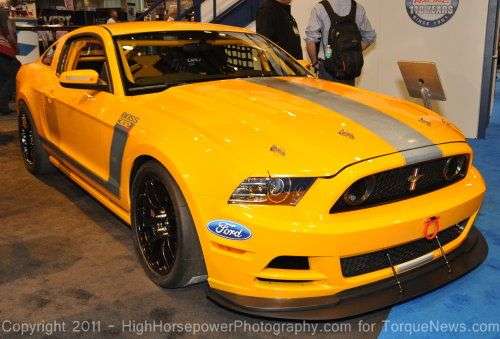 The folks at Ford Racing have done a fine job of offering up high performance, race ready versions of the mighty Mustang and at the 2011 PRI show in Orlando, the folks from the Blue Oval’s performance group brought out the 2013 Ford Mustang Boss 302SX Concept.
Advertisement

The 2013 Ford Mustang Boss 302SX Concept begins with the same high performance 5.0L V8 engine found in the Boss 302R but the 302SX features an improved engine oil cooler, the upgraded fuel system from the Boss 302, an enhanced cooling system, Ford Racing mufflers and a Torsen limited slip differential with all of the power funneled to the wheels by means of the same 6-speed manual transmission found in the Boss 302R. Next, the chassis of the 2013 Boss 302SX is prepared for race use with a front and rear coil over suspension package from Dynamic Suspensions, a Ford Racing adjustable front and rear stabilizer bars, tubular control arms and caster/camber adjustment plates. Ford Racing then turned their attention to the braking system, adding a Brembo front brake system with 4-piston calipers with 14” front rotors and 12” rear units with PFC brake pads and a brake cooling duct kit along with a uniquely calibrated ABS system from Ford Racing. Helping the Boss 302SX accelerate, handle and stop is a set of lightweight 18x9.5” wheels wrapped in race tires.

Finally, Ford Racing has stripped out the interior of the 2013 Ford Mustang Boss 302SX, making room for a Recaro HANS Pro Racer seat, a FIA spec 6-point roll cage, a fire suppression system, a data recording system, a 6-point racing harness, and a quick release steering wheel. In addition to the external changes to the 2013 Mustang, the Boss 302SX features a lower front splitter and a massive adjustable rear spoiler along with unique badging to announce the new race package.

Ford Racing has not announced a price for the 2013 Mustang Boss 302SX nor is it clear where it sits in the Ford Racing lineup but there is no question that this package could make for a great option for the serious road racer who wants to pilot a factory-built, high performance Mustang race car. With a similar level of modification to the Grand Am spec Mustang that costs over $125,000...we can expect that this high performance Mustang will likely carry a fairly high price tag. However, that makes this new race ready Mustang no less awesome.

Check out the gallery on the right for a closer look at the 2013 Mustang Boss 302SX and stay tuned to TorqueNews.com for all of your automotive news!

Tesla-Funded Research Reveals One of The Biggest Mysteries of EV Battery
Tesla Tesla Buyer Nets a Whopping $12,000 Discount After Asking for Reduction
END_OF_DOCUMENT_TOKEN_TO_BE_REPLACED