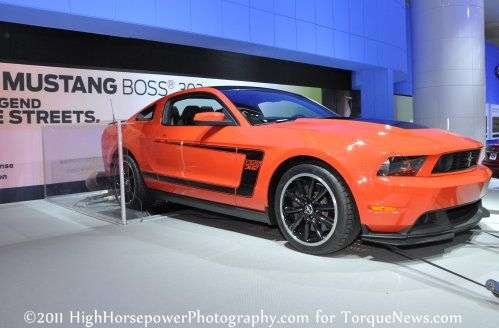 The National Highway Traffic Safety Administration has launched a preliminary investigation to examine reported shifting problems in 2011 and 2012 Ford Mustangs powered by the 5.0L V8 and backed by the new 6-speed manual transmission – a problem that could result in a recall of the new Mustang should a defect be discovered by the Federal agency.
Advertisement

The NHTSA opened their investigation after receiving 32 complaints about the 2011 and 2012 Ford Mustang having shifting issues in models equipped with the new 6-speed manual transmission. Depending on what the government’s safety regulator finds during their studies, Ford may be faced with a recall to address these issues should a defect be discovered. In total, roughly 26,000 Mustangs from the 2011 and 2012 model year are affected by this investigation.

Since the incredible new 2011 Ford Mustang GT stormed onto the scene with a new 412 horsepower 5.0L V8 and a 6-speed Getrag transmission the mighty Mustang has received rave reviews from owners and writers alike. However, there have been regular grumblings on various internet communities like MustangForums.com about how these 2011 Mustang’s with the 6-speed manual were experiencing a variety of problems with the new transmission. These issues included excessive noise from the transmission and, worst of all, the inability to shift from or to certain gears at high rpm. As more and more of these upset owners came forward, surprisingly little was done but relief may be in sight as the NHTSA has stepped in – opening a preliminary investigation to see if there is a defect in the 2011 and 2012 Ford Mustang.

I had a chance to speak with MustangForums.com member Shane McGlaun, who is the proud owner of a 2012 Ford Mustang Boss 302, #0333. Shane has owned several Mustangs (including 2012 Boss 302 #0001!) and has never experienced the problem before but during a recent track day session, he found that his high performance Mustang was having problems getting from 3rd to 4th gear at high rpm. He attributed the problem to the Texas heat combined with the added abuse of the track day (although the 2012 Boss 302 is built to race) and didn’t think much of it until he found that under normal driving circumstances on the open road, his Mustang was still having problems getting from 3rd to 4th gear. He has also run into instances where he will depress the clutch to shift and the pedal won’t return from the floor – both of which are regular issues in those Mustangs experiencing the problems that have spurred the NHTSA investigation. The only “fix” that Shane has found is to let the engine speed (rpm) drop until the clutch pedal kicks back out or in the case of the transmission not wanting to go into 4th gear, Shane has found that shifting into 6th and then going to another gear works. However, with a brand new sports car most people don’t want to have to figure out ways to get into gear…and they shouldn’t have to.

The video below is in-car footage taken by Shane McGlaun in his 2012 Ford Mustang Boss 302 #0333. It is great fun to watch and listen to the new Boss 302 in action but around the 7:30 mark, as Shane rockets down the straightaway and attempts to shift from 3rd to 4th gear, the transmission does not oblige and Shane is forced to shift into 6th gear. If you listen carefully, you can hear the sweet roar of the Boss 302 engine as the engine speed climbs and then radically drops as the inability to get into 4th gear sends Shane going for 6th.

While not everyone takes their Mustang to the track, think about merging into 70mph traffic on the highway and as you go to shift from 3rd gear to 4th gear easing into traffic…the car will not go into 4th gear. Now you have other traffic running up on you from behind and you’re in a car that won’t go into gear and because of that – it won’t pick up speed. That presents a very clear safety risk so the NHTSA is looking in to the problem to see if there is cause for a recall of manually shifted 2011 and 2012 Ford Mustangs. Luckily, there have been no reports of accidents or injuries stemming from this problem but reports indicate that several of the 32 complaints that caused the investigation alleged that it almost caused an accident.

TorqueNews.com will continue covering this – bringing you news as it becomes available!