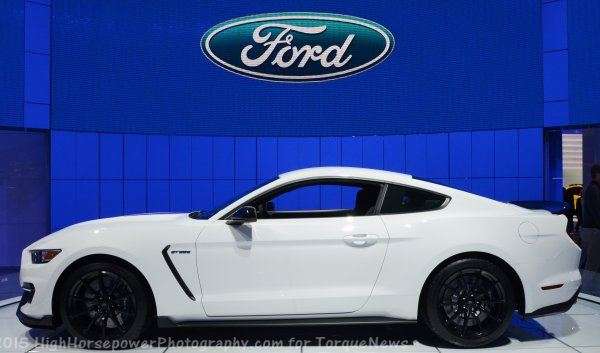 The sales boom caused by the introduction of the 2015 Ford Mustang continued in February 2015, as the Motor Company moved enough new pony cars to comfortably beat both the Chevrolet Camaro and the Dodge Challenger while building a large early lead in the annual muscle car sales race.
Advertisement

Even though much of the United States is locked in the icy grasp of Old Man Winter, muscle car sales continued to be strong in February, with the Ford Mustang, the Chevrolet Camaro and the Dodge Challenger all having a very good second month of 2015. As expected, the high early demand for the 2015 Mustang has allowed Ford to post the best numbers in the segment so even though both Dodge and Chevy had solid muscle car sales numbers, the Mustang led the way for the second month in a row.

February Muscle Car Sales
In February 2015, the Ford Mustang was the top dog in the muscle car segment, with 8,454 units sold. This is actually a slight decrease from the number of Mustang fastbacks and convertibles delivered in January, but this figure still represents a huge increase over the same month last year (which helps to show the sales growth coming from the arrival of the 2015 model year).

The Chevrolet Camaro was a distant second in February 2015 with just 6,373 units sold. The Camaro posted a large increase in monthly sales from January to February, but even with the slight drop in Mustang sales from January to February, the Camaro still fell well short of the new Mustang. It should be noted that February sales for the Camaro were the best since 2012, so even with a new Mustang in dealerships, the 6 year old Camaro is still selling very well.

The Dodge Challenger ranked third overall in February (as usual), but like the Mustang, the big Mopar muscle car is benefitting from the 2015 model year rush. With 5,255 Challengers sold, last month was the best February ever for the modern Dodge muscle car so while it isn’t beating the Camaro or Mustang, the Chrysler Group has to be very happy with Challenger sales through the first two months of 2015.

The Mustang Looks to Win in 2015
Since the Chevrolet Camaro was introduced for the 2010 model year, the Ford Mustang has not led a calendar year in muscle car sales. While the Mustang has won plenty of months in the last 5 years, the Camaro has been the bestselling muscle car and the bestselling “sporty car” in America every year since it returned to the Chevy lineup and in 2015, Ford wants to change that. With the early rush for the 2015 Mustang, Ford is building a strong early lead and once warmer weather hits the US, a boom in muscle car sales in general should lead to even more new Mustang sales.

Of course, the Dodge Challenger and Chevrolet Camaro will see similar sales booms in the warm months, but with so many prospective buyers waiting for the snow to clear to buy a redesigned Challenger or Mustang, the Camaro should have its toughest battle yet to win the annual sales race.

Jonny wrote on March 8, 2015 - 9:12pm Permalink
I find it interesting that a good month for mustang is 8500 while a mid size car would be dropped for that small amount. I guess there is a lot more profit with sport cars.
Randy wrote on March 31, 2015 - 4:33pm Permalink
I think the difference is that sporty cars act as advertising for their brand, so it's not as much about high sales as them providing a boost in sales for their other models.