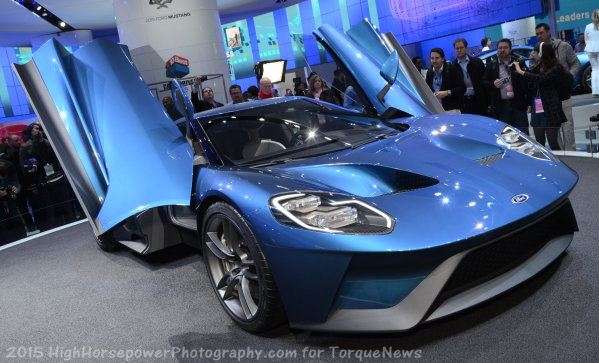 Ford GT to Cost Around $400k, Which is Disappointing for Several Reasons

While no new technical specs have come from the new Ford GT supercar’s European debut in Geneva, information on both production numbers and price have come from the massive Swiss show, with global production limited to just 250 units and a price that could start up around $400,000 – almost guaranteeing that this car will not serve as a proper competitor to the Chevrolet Corvette Z06 or Dodge Viper.
Advertisement

For almost a decade, Ford Motor Company hasn’t offered up a proper competitor for the likes of the Dodge Viper and the higher performance Chevrolet Corvettes (C6 ZR1, C7 Z06) but with the introduction of the new Ford GT supercar at the Detroit Auto Show in January, it looked like the Blue Oval would finally have a car to take on the cross-town legends. Ford didn’t offer up any solid details on the new GT in Detroit, but we learned that it would be a mid-engine, rear wheel drive design in a chassis that is heavily comprised of lightweight carbon fiber. We also learned that it would be powered by a new 3.5L EcoBoost V6 would at least 600 horsepower.

Based on what little we knew, it sounded like the next generation Ford GT would be a supercar to battle the likes of the 2015 Corvette Z06 and the Dodge Viper T/A, but after hearing the news from Geneva that production will be very limited and the price could reach the half million dollar mark, it sounds like the GT will be more of a collectable boutique car than a real supercar.

Very Limited Numbers, Very Big Price
According to the reports coming out of Geneva, the 2016 Ford GT will be one of the most limited production products from the Motor Company ever, with just 250 units planned per model year. That isn’t for the US, mind you, that is for the entire world, so getting one is going to be very near impossible. Also, Ford’s Raj Nair expects that the GT will compete with the Lamborghini Aventador in terms of pricing. The Aventador starts at $397,500 for the US market so based on Nair’s comments, the new Ford GT should have a price starting right around $400,000. It should also be noted that Lamborghini has sold about a thousand Aventadors a year since it was introduced, so even the Lamborghini will be easier to get by those wealthy enough to afford one.

Also, with production being so limited, we are almost guaranteed to see dealerships applying massive markups to the final price, so it shouldn’t be unusual to see prices climb well over the half million dollar mark – unless the automaker does something to prevent dealer markups.

High Collectability = Little Track Time
While many people reading are realizing that with a price tag of $400k, the new Ford GT is well out of their price range, the fact that production is so limited and the price is so high is bad news for a much bigger reason, in my opinion. This limited number and high price makes the Ford GT an instant collectable and because of that, we aren’t very likely to see many of these cars taking to the track to prove that it is the superior supercar when compared to the Chevrolet Camaro Z06 or Dodge Viper T/A.

With a price starting at $400,000, the new Ford GT is like the anti-Mustang. Where the Mustang is built and priced so that lots of people can afford a high performance machine, the GT is priced for super-rich businessmen who don’t know the first thing about turning a fast lap on a road course. Sure, we might see a couple wealthy Middle Eastern billionaire kids street racing them here and there, but there is a far better chance that this new supercar will be compared to the Corvette and Viper on paper far more often than it will be on the race track…and that is sad news for those of us hoping for a proper American supercar battle.

On the good side, at least the 2016 Ford GT looks pretty…as that is the most important aspect of an instant collectable.

Ben wrote on March 4, 2015 - 1:52pm Permalink
I can't speak for the other FGT owners-to-be, but -- collectability be damned, I'm planning to hoon ours around Laguna Seca as soon as I can find a suitable track day after it arrives. Not *all* wealthy enthusiasts are novices... some of us were enthusiasts first, and wealthy later.
Natrul01 wrote on March 4, 2015 - 3:25pm Permalink
I agree. Even though the Ford GT is way beyond my means, no way in hell would I let it sit in the garage. If I had the money, I would enjoy this car as much as possible. If you're not going to drive it, you shouldn't own it.
Auto Motive wrote on March 5, 2015 - 7:46am Permalink
Ford understands even at a lower price this hand built 6 cylinder couldn't be a huge selling machine. They also understand the next gen Corvette will be a 4.5 liter V8 tri turbo AWD hybrid mid engine super car pushing at least 800 hp and priced at around $150-200k - Even the NSX base price will be around $130k. The Z06 is a performance machine at $79k base. Lateral g's of 1.5 will get your blood boiling on the track. Add the larger 2.4 eaton super charger and push the hp up close to 800 and hold on.