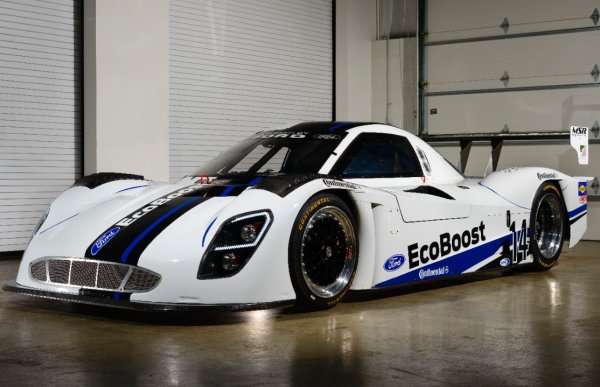 Ford Getting Into Endurance Racing with EcoBoost Power

Ford Racing announced this morning that the Motor Company is getting back into endurance racing with their tried and true EcoBoost V6 – with a planned debut of the EcoBoost’d Daytona Prototype race car at January’s Rolex 24 at Daytona International Speedway.
Advertisement

Ford has done a great many things with their EcoBoost technology but on January 25th and 26th 2014, Ford Racing will introduce their popular EcoBoost V6 motor to the world of endurance racing in the TUDOR United SportsCar Championship. The Michael Shank Racing team is the first to announce plans to run the new EcoBoost race engine in their Daytona Prototype race car. The motors used by Michael Shank Racing will be built by Roush Yates Racing Engines – the same group responsible for Ford Racing NASCAR engines.

“At Ford Racing, we really put great emphasis on racing production-based vehicles as well as production-based technologies,” says Jamie Allison, director, Ford Racing. “We’re proud to bring a direct-injected, twin-turbo 3.5-liter V6 EcoBoost engine to the United SportsCar Championship in a field of competitive V8-powered entries. We want to show Ford EcoBoost’s capabilities as an engine that provides both performance and fuel economy, on and off the track.”

“Ford Motor Company stands for innovation and leading-edge technology, so having a chance to debut our Ford EcoBoost technology in a high-visibility setting such as this record run attempt, as well as the entire 2014 USCC schedule with its iconic races is great,” says Allison. “Through USCC racing and its fan outreach, we want to showcase how EcoBoost technology presents the combined benefits of performance and fuel efficiency – something all consumers would want in their vehicles.”
The MSR Daytona Prototype packing EcoBoost power will actually make its track debut at Daytona International Speedway on October 9th 2013 as driver Colin Braun looks to break the average lap speed record of 210.364. That record was set back in February 1987 as Bill Elliot took his Coors sponsored Ford Thunderbird around the track for a record that has stood for over 26 years.

“It’s really a privilege to have an opportunity to put your name in the record books like this,” says team owner Mike Shank. “It is almost inconceivable that this record has stood for such a long time, so it’s pretty special to be involved. We worked a long time to develop our relationship with Ford to be in a position to take on projects like this. Anytime you can get in the record books, it is a great opportunity and just builds on what this company has done.”

That run at the Daytona International Speedway where the EcoBoost Daytona Prototype car will try to knock off Bill Elliot’s record run from 1987 is scheduled to begin at 8am on October 9th. You can be sure to find the results as soon as Ford Racing announces whether or not the MSR Daytona Prototype racer packing the 3.5L EcoBoost V6 breaks the 26 year old NASCAR record.

With Ford announcing their departure from the NHRA, we can expect that the Blue Oval will appear in other forms of auto racing and with the growing popularity of the world of endurance racing – this seems like a smart move by Ford. While putting their logo and the EcoBoost name on a racecar, this will also further Ford’s efforts to show that EcoBoost technology really can do anything as the EcoBoost in the Daytona Prototype class will be competing mostly with V8 powered racecars.