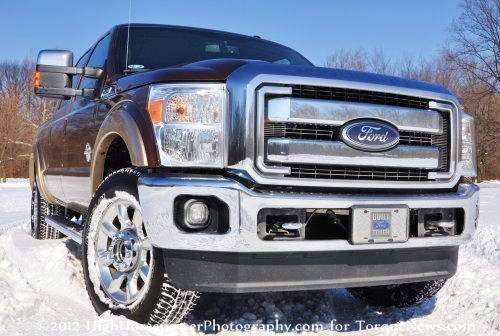 There was a lawsuit filed on Wednesday in a New Jersey federal court alleging that Ford Motor Company knowingly sold trucks and sport utility vehicles that were equipped with fuel tank linings that could deteriorate over time and causing other fuel system problems.
Advertisement

According to the legal paperwork, New Jersey-based Coba Landscaping and Construction Inc is suing Ford Motor Company because Ford F Series pickups and E Series full sized vans sold between 1999 and 2008 were supposedly built with fuel tanks that had faulty linings. Over time, these linings would deteriorate and fall apart; with the loose particles of rust finding their way into the fuel lines and fuel filters. Once enough of this crud would build up in the fuel system, it would cause the truck or van to buck or suddenly stall.

The lawsuit paperwork goes on to state that Ford Motor Company issued a “secret” technical service bulletin to dealerships about the possible F Series and E Series fuel tank problems but there was never any official recall or offer to fix the problem. The complaint insists that “hundreds, if not thousands” of people were affected by this issue.

The exact monetary figure being sought by the plaintiffs has not been disclosed but the lawsuit states that the suing party seeks “compensatory, punitive and triple damages” for fraud, breech of warranty and unjust enrichment. For those not familiar with that last term, unjust enrichment is when one party is being sued for benefiting essentially through wrongdoing towards another party. In this case (again in theory, according to the lawsuit), Ford Motor Company profited from selling faulty trucks and not incurring the expenses of a recall – so they have made money unjustly. The fraud charge likely relates to the idea that Ford knew about the problem but did nothing about it and the breech of warranty portion of the lawsuit is pretty self explanatory.

A portion of the Ford F Series trucks and E Series vans possibly included in this lawsuit of Coba et al v. Ford Motor Company have been involved in a fuel tank recall but that related to the fuel tank straps rusting and failing in areas where lot of salt is used to fight ice on winter roads. It will be interesting to see how this case pans out, as if the federal court finds that Ford has indeed failed to handle this alleged fuel tank issue properly, it could cost them in more than one way.

The Ford F Series has been the bestselling vehicle in the US market for a long time – including the years name in the lawsuit. If the plaintiffs in this class action suit are awarded money, it could get to be a very, very expensive case for Ford Motor Company. Also, if the courts rule in favor of the plaintiffs, you have to wonder if the NHTSA might begin looking into the problem themselves. If they find that there is indeed an issue with the fuel tanks that can lead to stalling on the open road, there could conceivably be a recall for what would likely be well over a million trucks and full sized vans.

TorqueNews will continue following this story, bringing you any updates as they become available.