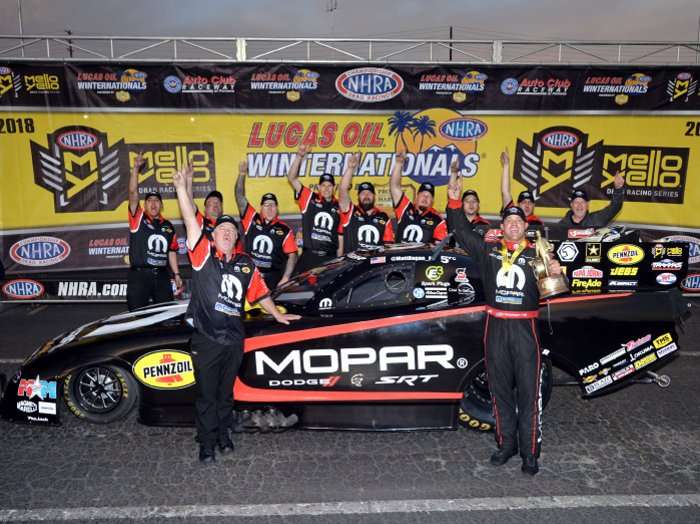 Matt Hagan and his Don Schumacher Racing Dodge Charger R/T funny car opened the 2018 NHRA season with a win this past weekend in Pomona while two of his three teammates made it into the final four – along with 2017 champion and Camaro driver Robert Hight.
Advertisement

The 2017 NHRA funny car season was fuel by the rivalry between the Don Schumacher Racing Dodge Chargers and the John Force Racing Chevrolet Camaros. Although drivers in a DSR Charger won 16 of the 24 races last season, Robert Hight drove his JFR Camaro to the championship thanks to the point reset leading into the 6-race “Countdown to the Championship”.

Needless to say, after dominating the 2017 funny car season, the Don Schumacher teams are looking to take back the championship in 2018 from their Chevy-driving rivals and at the first event of 2018 – Matt Hagan knocked off Robert Hight to start the season with a win.

A Fast Start to 2018
The 2018 NHRA funny car schedule got off to a great start at the Winternationals in Pomona, California, with several of the drivers expected to challenge for the title running fast times right out of the gate.

In the second round, the field got a bit quicker, with Jack Beckman jumping into the top spot with a run of 3.86 and Matt Hagan moved up to second with a 3.877. Capps and Hight moved to third and fourth when their second round runs werent quicker than their first, but DSR driver Tommy Johnson Jr ran a 3.932 to move up to the sixth spot in the order. Also during the second round, Hight’s teammate Courtney Force ran a 3.948 to move into the eighth spot while John Force lingered at the rear of the field with two shaky qualifying runs.

In round #3, there was a big shake up as the funny cars kept on getting faster. Hagan ran a 3.859 to jump to the top spot while Courtney Force ran a 3.877 to move into third and Ford Mustang driver Tim Wilkerson ran a 3.886 to take the fifth spot. The third round also saw John Force run a 3.937 to move to the ninth spot while the rest of the heavy hitters went onto the final round with times from the first two rounds.

Finally, as an interesting bit of foreshadowing to the rest of this race, the fourth round of funny car qualifying saw Hagan hold onto his top spot with a 3.822 and Robert Hight moved to the second spot with a 3.850 while the rest of the key competitors in the field held steady from the previous round. As a result, the qualifying order for the first race of 2018 started Dodge-Chevy-Dodge-Chevy-Dodge.

In the semifinals, Robert Hight got an easy pass to the finals when Jack Beckman broke at the line while teammates Ron Capps and Matt Hagan had a great drag race, with Hagan taking the win with a better reaction time and a quicker ET.

This is the second year in a row and the third time in four years where Matt Hagan has opened the season with a win, but overall, it was a great first outing for Don Schumacher Racing. While it wasn’t such a great start for Courtney and John Force, Hight’s runner-up finish gets him off to a great start in the effort to back up his 2017 championship.

The next event of the 2018 NHRA season is the Arizona Natiionals on February 23-25 at Wild Horse Pass Motorsports Park in Chandler, Arizona.