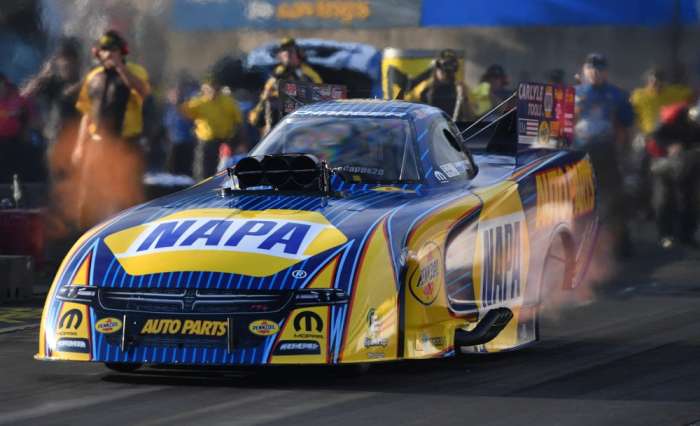 The front-running Dodge Charger and Chevrolet Camaro funny cars had a rough go of the first of six races that will decide the 2018 NHRA championship, with a Toyota Camry and a Ford Mustang meeting in the finals while the drivers at the top of the order coming into the Countdown struggled.
Advertisement

In other words, none of the teams that dominated through the first 18 races of the season made a run at the Wally at Maple Grove Raceway, marking the first time this season that there wasn’t a Dodge Charger or Chevrolet Camaro in the funny car finals. In fact, the last time that DSR or JFR didn’t have a car in the finals was in the 15th event last season, which also had JR Todd’s Toyota beating Tim Wilkerson’s Mustang.

Eliminations
The first round of eliminations of the 2018 Dodge Nationals was a tough one for the front-runners. After qualifying in the top spot, Courtney Force lost in the first round to Mike Smith. Number 4 qualifier Jack Beckman lost in the first round to Cruz Pedregon and number 6 qualifier Shawn Langdon lost to Robert Hight. Meanwhile, John Force beat Matt Hagan in a Dodge-Chevy battle to advance to the second round, while the other Don Schumacher drivers – Tommy Johnson Jr and Ron Capps both won, with Johnson beating Jim Campbell and Capps beating Jonnie Lindberg.

In the second round, JR Todd beat Mike Smith, Ron Capps beat Cruz Pedregon, Tim Wilkerson beat John Force and Robert Hight beat Tommy Johnson Jr, setting up a Toyota-Dodge battle on one side of the bracket and a Chevy-Ford battle on the other side. With Height coming into the Countdown in the third spot and Capps sitting in the fourth spot, the Dodge and Chevy were the favored cars in the semifinals, but the third was another round for the underdog.

JR Todd and his Toyota Camry grabbed an early lead over Ron Capps and kept on driving away, running a 3.975 to the Charger’s 4.014. In the second race of the semifinals, Robert Hight ran the faster ET, but it didn’t matter, as he redlighted and gave the win to Tim Wilkerson and his Ford Mustang.

In the finals, JR Todd pulled another holeshot, and he continued to run consistent 3.90s, beating Wilkerson when his Mustang ran into troubles late in the run.

Championship Standings
After winning the first race of the Countdown to the Championship, JR Todd and his Toyota Camry now sit in the top spot with 2,166 points. Robert Hight is second (-23), Courtney Force is third (-25), Ron Capps is fourth (-29) and Matt Hagan rounds out the top five (-54).