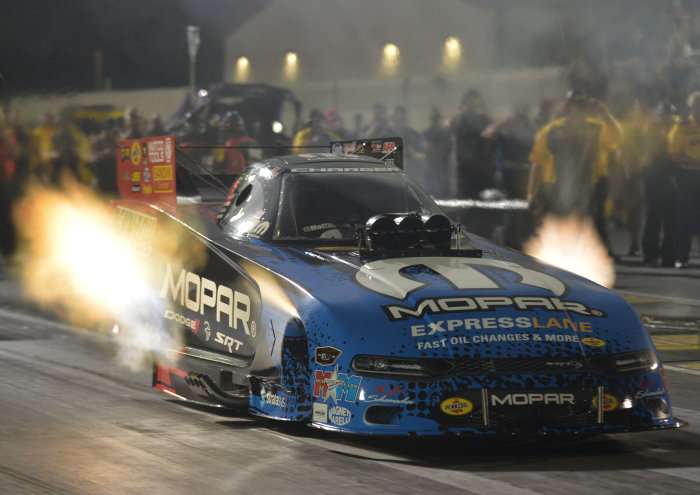 This past weekend, the NHRA big leagues completed the 18th event of the season, advancing the schedule into the “Countdown to the Championship”, with all four Don Schumacher Dodge Charger teams and all three John Force Racing Chevrolet Camaro teams making it into the countdown round.
Advertisement

JR Todd drove his Toyota Camry to victory in the Funny Car class of the Chevrolet Performance U.S. Nationals this past weekend, but the biggest news today from the NHRA focuses on the drivers who have made it to the Countdown to the Championship. These are the top 10-finishing drivers in the Funny Car class during the first 18 events, all of whom will now battle it out for the title in the final six races of the 2018 season.

As we expected, Courtney Force and her JFR Camaro claimed the top spot going into the Countdown. The points are reset before this final portion of the schedule and Force leads the race with 2,100 points. Matt Hagan is second with 2,080 and each of the other eight drivers are each 10 points behind the driver ahead of them. This group is comprised of all four Don Schumacher Racing Dodge Charger teams, all three John Force Racing Chevrolet Camaro teams, two Toyota teams and a Ford team and one of these ten drivers will win the 2018 NHRA Funny Car National Championship.

Countdown Lineup
As mentioned above, Courtney Force and her Camaro lead the Funny Car class at the standard of the Countdown to the Championship, with Matt Hagan and his Hellcat Charger in second place, 10 points back. Robert Hight of John Force Racing sits 10 points back of Hagan in third with his Camaro while Ron Capps and his Charger R/T are 10 more points back in fourth.

JR Todd is the first non-Dodge/non-Chevy driver in the Countdown field, sitting fifth in his Toyota Camry while two Dodge Charger R/Ts from Don Schumacher Racing – Jack Beckman and Tommy Johnson Jr – are sixth and seventh.

Shawn Langdon has his Camry sitting eighth, John Force and his Camaro sit ninth and in the tenth and final spot in the championship field is Tim Wilkerson in his Ford Mustang.

In 11th place – one spot out of the Countdown field – is Bob Tasca III in his Ford Mustang. Due to the Countdown format, he is 1,320 points out of first place, making it mathematically impossible for him or anyone else outside of the top 10 to have a shot at the title.

The next stop on the schedule and the first stop in the Countdown to the Championship is the Dodge NHRA Nationals at Maple Grove Raceway on September 13th through the 16th. The season ends on November 11th at the Auto Club NHRA Finals in California.