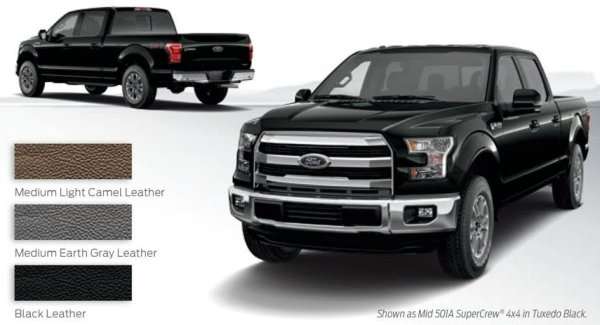 We have previously looked at the King Ranch, Platinum and FX4 packages for the 2015 Ford F150 and as we continue our in-depth looks at the next generation half ton pickup, we move onto the 2015 F150 Lariat – a model which will help the F Series continue to be the bestselling vehicle in America.
Advertisement

The 2015 Ford F150 Lariat is marketed as the lowest priced “upscale” model of the new half ton pickup, costing less and coming with less goodies than the likes of the King Ranch or Platinum package. The F150 Lariat will likely be offered in its 500A base model, a 501A mid level package and a 502A luxury package that comes with the longest standard feature list inside and out. Provided that the 2015 Lariat package follows the 2014 models, this affordable luxury model will be offered in either a SuperCab or SuperCrew design with the buyer’s choice of a 6.5 or 5.5 foot bed and either rear wheel drive or four wheel drive. I would also expect the 2015 F150 Lariat to come with any of the 2015 engines and while that is all speculation – we have an idea of what to expect inside and out thanks to the Ford Appearance Guide.

2015 Ford F150 Lariat
While we don’t know what to expect from the 500A package, we know some of the details for the 501A F150 Lariat (shown above). Up front, the Lariat package includes a chrome three bar grille and chrome surround with a black mesh insert along with a chrome front bumper and black painted tow hooks for 4x4 models. Along the side, the F150 Lariat will wear body color mirror caps, body color door handles, body color door handle bezels and 18 inch machined aluminum wheels with silver painted pockets. Out back, the Lariat package also includes a standard chrome rear bumper.

On the inside, the 2015 Ford F150 Lariat in 501A trim will come with a standard 40/20/40 split bench design in Light Camel Leather, Earth Gray Leather or Black Leather. Those who opt for the floor shifter will also get bucket seats wrapped in the available leather hues with a storage console between those bucket seats.

2015 Ford F150 Lariat Sport
Those 2015 Ford F150 Lariat buyers who want a sportier look can opt for the 863 Sport package, which is available with either the 501A or 502A package. This begins up front with a Magnetic (dark gray) three bar grille and grille surround with a black mesh insert, a body colored front bumper with a Magnetic center section and black tow hooks on 4x4 models. Along the sides, the Lariat Sport gets a set of 18 inch six spoke machined aluminum wheels with Magnetic painted pockets, a set of Magnetic step bars and Sport decals on the bedside. The rear bumper of the Lariat Sport is also finished in the same color as the body of the truck. On the inside, the 2015 Ford F150 Lariat Sport is available only with the bucket seats and console mounted floor shifter and the only exterior color option is Black leather.

2015 Ford F150 Lariat Chrome Appearance Package
If you are buying a 2015 Ford F150 Lariat and you want a higher end luxury look, you can opt for the 86L Chrome Appearance Package – which is available with 501A and 502A forms. The Chrome Appearance Package begins with a chrome grille with a chrome surround and a chrome mesh insert, a chrome front bumper and chrome tow hooks on 4x4 models. Along the sides, the Chrome package for the F150 Lariat adds chrome mirror caps, chrome door handles in body colored bezels, chrome side step bars and 18 inch chrome wheels while the back end sports a chrome bumper and chrome exhaust tip. The 40/20/40 split bench seat setup is standard in Light Camel Leather, Earth Gray Leather or Black Leather, but bucket seats and a floor shift console are also available.