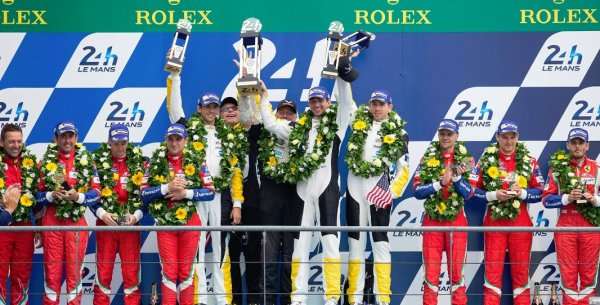 The Chevrolet Corvette C7R showed that it is one of the best production based race cars in the world this past weekend, with the Corvette Racing crew claiming the 2015 24 Hours of LeMans win in the GTE Pro class – winning by 5 laps after a 24 hour long battle with a Ferrari 459 Italia.
Advertisement

The Corvette Racing team has had a fantastic 2015 season, which started with a win of the Rolex 24 at Daytona and a win at the 12 Hours of Sebring. The #3 Corvette C7R is currently the leader in the GTLM class of the IMSA Tudor United Sports Car Championship series, but this past weekend, both Corvette Racing teams were in France for the 24 Hours of LeMans. After winning the two key endurance races in the United States, the Corvette teams came into LeMans with the hope of proving their excellence on the world’s biggest endurance racing stage – and they didn’t disappoint.

Crash In Qualifying
The Corvette Racing team arrived at the 24 Hours of LeMans with two teams – the #63 Corvette C7R of Jan Magnussen, Antonio Garcia and Ryan Briscoe and the #64 Corvette C7R of Oliver Gavin, Tommy Milner and Jordan Taylor. In the American endurance racing series, the #63 Corvette team (#3 in Tudor Series) has done the winning this season while the #64 car (#4 in Tudor) has struggled a bit so because of this, the #63 team was the one to watch.

However, a mechanical failure during qualifying caused Jan Magnussen to lose control of the #63 Corvette and the resulting crash damaged the front and rear of the car too severely to be fixed on site. Because of this, the #63 Corvette was forced to withdraw from the 2015 24 Hours of LeMans. Magnussen was checked out after the crash and he was ok, but he and his co-drivers had to have been disappointed to miss their chance at LeMans glory.

Corvette Rushes to the Front
The qualifying effort for the #64 Corvette C7R may not have been fantastic, but the performance of the car and the driver effort of all three drivers was fantastic during the first quarter of the race.

Oliver Gavin started the race in the #64 Corvette and he worked his way up to the fourth spot before turning over the reins to Tommy Milner. Milner continued to cut through the field and it was during his seat time where the C7R first moved into the GTE Pro class lead for the first time. When Jordan Taylor got into the #64 Corvette, he found himself in fourth place and when the 6 hour mark was reached, he had gotten back up into the second spot.

During the middle 12 hour portion of the 24 Hours of LeMans race, all three drivers spent time at the front of the field, dropping back only when they made pit stops, but always making their way back to the front of the GTE Pro class. There were plenty of battles during this lengthy period, but the Corvette C7R drivers repeatedly worked their way around the other production based race cars.

Late in the race, the #64 Corvette was in second place, trailing the #71 Ferrari 458 after making a late race pit stop. The Corvette was working on reeling in the Ferrari with around two hours left when the 458 ran into gearbox troubles that forced the car into the garage area for emergency repairs. As a result, the #71 Ferrari fell 5 laps behind the #64 Corvette and from there – it was all downhill for Corvette Racing. With the Ferrari out of contention, the Corvette C7R cruised to the LeMans victory. It was somewhat anti-climactic, but after the Corvette team had spent so much time at the head of the class during the 24 hour race, it was fitting that the drivers had an easier run to the checkered flag.

This win marks Corvette Racing’s 8th at LeMans since they first began competing in France back in 2000. This is Oliver Gavin’s fifth 24 Hours of LeMans win, Tommy Milner’s second LeMans win and the first for young gun Jordan Taylor. Now that the Corvette Racing team has proven its dominance of the production based endurance racing world overseas, the teams will head back to the US for the remainder of the 2015 Tudor United Sports Car Championship.

Tesla Contemplates A New Strategy for China Retail even As Sales Boom
Jay Leno on Elon Musk & EVs: “I Think He Should Get ... Credit"
END_OF_DOCUMENT_TOKEN_TO_BE_REPLACED