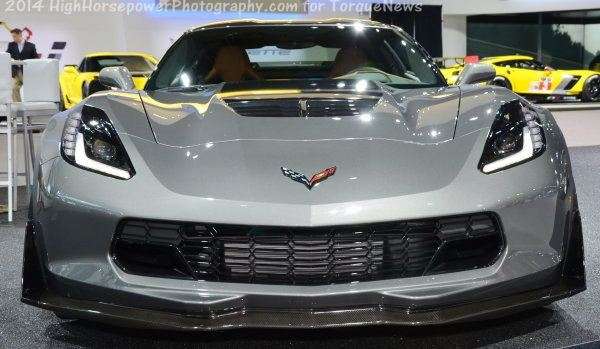 Production of the 2015 Chevrolet Corvette Z06 began earlier this week and to kick off production, General Motors has rolled out a video showing the full details for the three different aero packages for the new C7 Z06.
Advertisement

The 2015 Chevrolet Corvette Z06 is a true supercar, with a high powered engine, a high tech suspension setup, a state of the art braking system, a plush cockpit and an exterior design that is both beautiful and functional. However, buyers of the new Z06 can pick just how aerodynamic they want their 650hp Corvette to be with three different aero packages developed in conjunction with the Corvette Racing program and the result is the most aerodynamically correct Corvette ever. With the help of Corvette Chief Engineer Tadge Juechter, GM explains each of those packages in the video below.

The Standard Corvette Z06
The 2015 Chevrolet Corvette Z06 comes with an aggressive front splitter that extends down off of the front fascia and a low profile rear spoiler with a set of wicker –flaps that stick straight up off of the back of the spoiler to create a tremendous amount of downforce with minimal drag. Everything else on the Corvette Z06 is standard across all models regardless of the aero package chosen, including the unique hood, front and rear brake cooling systems and the aggressive rear fascia with an integrated lower diffuser with quad exhaust tips.

The Corvette Z06 Carbon Fiber Aero Package
Those who want a premium supercar look and improved downforce from their 2015 Chevrolet Corvette Z06 can opt for the Carbon Fiber aero package. This includes a similar yet more aggressive carbon fiber front splitter to that featured in the base Z06 package, carbon fiber rocker extensions and a larger rear spoiler with huge wickers. This is the package that Tadge Juechter states gets the Corvette to “true aerodynamic downforce” for the first time…although Im not quite sure what he means by that, considering that past models like the C6 ZR1 have to offer more downforce then lift.

In any case, the carbon fiber aero package gives the 2015 Corvette Z06 a more aggressive look and improved aerodynamic properties over the base Z06.

The Z07 Package for the C7 Z06
Those 2015 Chevrolet Corvette Z06 owners who want competition level aerodynamics can opt for the new Z07 package. This package begins with all of the components of the Carbon Fiber aero package and adds much larger end caps on the front splitter and a wicker bridge on the rear spoiler that fills in the center section of the wicker area with full adjustability for those racers who want to tune their downforce for a specific racing application. The result of the Z07 package is a level of downforce that has never before been measured on a production General Motors road car. Both the grey car and the yellow car above are fitted with the Z07 package.

When fitted with the Z07 package, the 2015 Chevrolet Corvette Z06 is the most track capable and the best performing Corvette ever. This incredible downforce should join forces with the high performance suspension setup, the 650hp LT4 engine and the carbon ceramic brakes to help the new C7 Z06 to break just as many track lap records around the world as the C6 ZR1 – if not more. With new Z06 coupes rolling off of the assembly line right now, it should only be a matter of time before we start seeing real world performance numbers from the most capable Corvette ever.

In the meantime, check out the GM video below that shows each component of the 2015 Corvette Z06 aero packages.