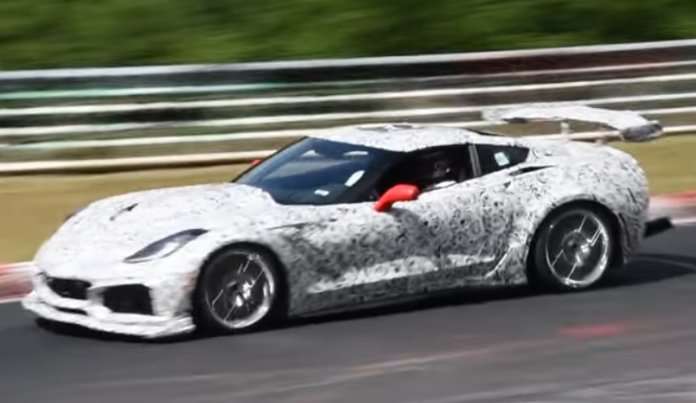 While there has still been no official word from General Motors on the existence of a mid-engine Corvette plan nor has there been any official word of a new ZR1, rumors and insider information suggests that the two new Super-Vettes could be sold side-by-side as soon as next fall.
Advertisement

Over the course of the past two years, we have frequently talked about a mid-engine Corvette and a new C7 ZR1. The mid-engine Corvette has been discussed for years, but spyshots showing what is most certainly a mid-engine test car in GM’s possession points to a mid-engine sports car, and many people expect the long-awaited mid-engine Corvette. The C7 ZR1 is expected to be the Corvette caught in so many spyshots and videos, including videos showing the next super-Vette storming around the Nurburgring with unique aero bits. Click here for a look at one of those videos, which is where the image above originated.

It is widely expected that the C7 ZR1 will cap off the current generation of the Corvette and the mid-engine model will introduce the beginning of the C8 generation, but new rumors suggest that the mid-engine car could reach showrooms as soon as the fall of 2018, which means that the C7 Corvettes – including the new ZR1 – will still be available.

The ZR1 – or Something with a Big Wing
Although GM has never offered any official information on the car which we all believe to be the C7 Chevrolet Corvette ZR1, there is no denying that the company is working on some sort of Corvette with more prominent aerodynamic features than the current Z06. Most notably, this mysterious Corvette has a massive rear wing and large vents in the front fascia – presumably to help cool down an engine with even more power than the 650hp LT4 in the Z06.

Even if this car isn’t called the ZR1, the spyshots, American on-road video footage and Nurburgring track footage makes it very clear that there is a more extreme Chevrolet Corvette on the way. If nothing else, it has a far more elaborate aerodynamic and cooling package than the Z06, so even with only a few more ponies – this new Corvette could offer significantly better performance.

As for the arrival, if GM was to unveil the new Corvette ZR1 at the LA Auto Show as a 2019 model, it would likely arrive sometime next summer or fall. It seems unlikely that GM would introduce a new, higher performance Corvette without some fanfare, so this seems like the most likely timing for a dealership arrival.

This could work, as the ZR1 should be an extremely high performance vehicle while the mid-engine Corvette is expected to be a milder performance model at first. It is rumored that the mid-engine car will be powered by a new, naturally aspirated LT5 with somewhere in the area of 500-550 horsepower. When combined with the balance of the mid-engine design, this Corvette – possibly called the Zora – would offer far superior performance to the Corvette Stingray, but it is unlikely (at first) to pack the monster power of the Z06 and pending ZR1.

Thanks to that difference in performance, the mid-engine Corvette could be sold alongside the current C7 Corvette lineup without much in-house competition. It would, however, give Chevrolet one of the most incredible model year performance lineups in America since the 1970s.

Van Free wrote on September 15, 2017 - 2:51pm Permalink
Does Chevy cell more of the base corvettes or the track version? They are in business to make money. Offering the ZR1 would replace the Z06 and here again what is the bottom line sales. ZR1 could benefit the chevy racing car. Forget the corvette rear engine coming out anytime soon. To GM, it is still about profits.
Travis wrote on September 16, 2017 - 9:14am Permalink
Except we already know the zr1 is real because chevy just sent posters and thank you letters to certain people who already have deposits on it