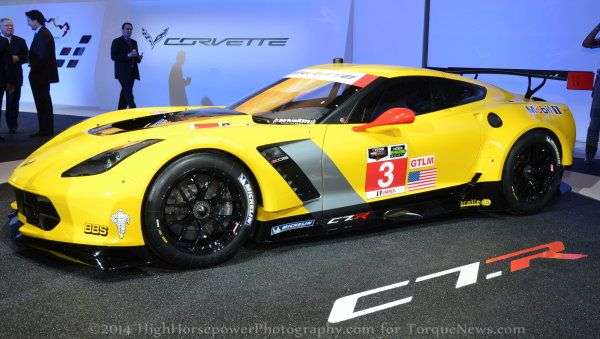 The new Chevrolet Corvette C7.R teams both took to the Circuit de la Sarthe track this past weekend for their first practice session leading up to the 2014 24 Hours of LeMans and while the results arent as good as they could be – it seems that the Corvette Racing teams are very pleased with their early lap times.
Advertisement

Each year, the Circuit de la Sarthe plays homes to an extensive practice day for those cars slated to compete in the 24 Hours of LeMans endurance race two weeks before the big race. With the 2014 LeMans race set to run on June 14 and 15, this past weekend brought about the first practice event at Circuit de la Sarthe and that practice day marked the first time that the new Chevrolet Corvette C7.R has hit the famed French road course. The Corvette Racing program has had a great deal of success in the 25 Hours of LeMans race over the years and with 2014 marking the first year for the C7 Corvette Z06-based C7.R, the teams have very high hopes for LeMans 2014.

This initial practice event for the 24 Hours of LeMans race consists of two 4 hour sessions on the track and the Chevrolet Corvette C7.R teams made the most – running a total of 89 laps between the two cars.

The quicker of the two Corvette C7.R teams was the #74 car with Oliver Gavin at the wheel. Gavin’s best lap of 3:58.403 made him the 4th quickest among the LMGTE Pro class, trailing the class leading Porsche 911 RSR by just over a second. Gavin is no stranger to the 24 Hours of LeMans, having driven for class winning team four times in the past – all of which were in a Corvette. Gavin will be joined by Tommy Milner and Richard Westbrook for the LeMans race in two weeks.

The #73 Chevrolet Corvette C7.R was the sixth fastest car in the LMGTE Pro class with Jan Magnussen at the helm. Magnussen, who has also won the LeMans 24 hour race four times in a Corvette, turned a best time of 3:59.192 – about 7 tenths of a second slower than the #74 Corvette and just shy of 2 seconds slower than the class leading Porsche. Magnussen will share seat time in the #73 Corvette C7.R with Antonio Garcia and Jordan Taylor. Magnussen and Garcia have teamed up to win the last two TUDOR United SportsCar Championship races while Jordan Taylor is in the middle of a very successful season in the Wayne Taylor Racing Corvette Daytona Prototype.

While it is obvious that the Chevrolet Corvette C7.R teams would have liked to have gotten to the top of the LMGTE Pro class at the first LeMans practice session, these are good early numbers for the Corvette teams. Throughout the TUDOR season, the Corvette teams have not always been among the quickest cars in practice or qualifying, but they have been very competitive in every single race since their introduction early this year. The teams have worked their way through the field to win several of the shorter races while mechanical gremlins have put an end to very strong runs in the Rolex 24 and the 12 Hours of Sebring.

The Chevrolet Corvette C7.R race teams have been dominant in the last two races, but those were much shorter races. In the two longer races to start the TUDOR season (Rolex 24, 12 Hours of Sebring), the Corvette Racing teams both ran into mechanical issues that killed what had been very strong runs. The Corvettes and their drivers are fast enough to win, but the teams will have to prove that their American race cars are tough enough to last through the 24 hour long French race.