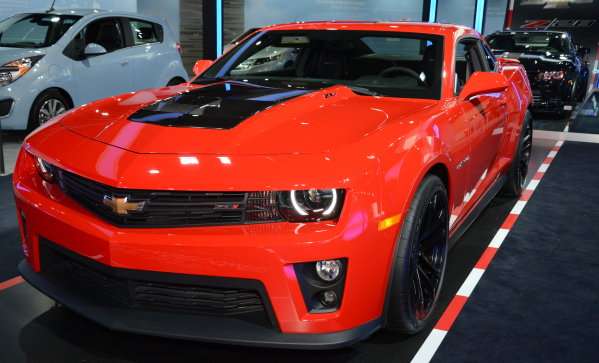 The Chevrolet Camaro Leads the 17 Bestselling Sports Cars in America

Now, before we get into talking about the 17 bestselling sports cars in America, let’s talk about my use of the phrase “sports cars”. There are some people out there who believe that only high performance cars with two doors, two seats and rear wheel drive are technically sports cars. This would be a group of cars like the Corvette, the Viper and a few Porsche models, but those people would have us exclude the likes of the Mazda Miata/MX5, simply because it is lower on power. However, while the Miata might be way behind in power, it is hard to question calling the Miata a sports car, because that is exactly what it is. Also, models like the Scion FRS and the BMW Z4 don’t pack big power, but they are clearly engineered to offer the same type of driving experience as the more powerful coupes and roadsters. Some people would also exclude the Camaro, Mustang and Challenger because they are muscle cars and not sports cars because they have a back seat, but in the grand scheme of things, the muscle cars are designed to thrill and that makes them sports cars in my book.

The list that I have compiled below shows the top 17 bestselling sports cars as I have classified them. They are all two door cars, although some have a back seat. There are engines of all sizes and while some of these models do have AWD packages, they are predominantly rear wheel drive models. These cars are all from high volume automakers, so you won’t find any of the strictly supercar brands like Ferrari or Lamborghini. Since sales for models like the BMW 2 Series, the BMW 4 Series, the Hyundai Genesis Coupe and the various Mercedes models that come in both sedan and coupe are lumped together, these are all models that are offered strictly as coupes or roadsters.

Essentially, these are the bestselling 2-door sporty cars, so while they might fall into more specific subcategories like muscle cars and supercars, these are the most popular sporty 2-door vehicles sold in the USA.

Muscle Cars Reign Supreme
Not surprisingly, the American muscle cars are the most popular sports cars in America, with the Chevrolet Camaro (86,297) leading the way, followed by the Ford Mustang (82,635) and the Dodge Challenger (51,611). The muscle cars sold so well that if you add up the 2014 sales totals for these three, you get a figure of 220,543 vehicles. If you add up the other 14 cars on this list and double that total, you get a figure of 204,144. In other words, Americans purchased more than twice as many muscle cars as they did other sports cars on the list.

Corvette is the Bestselling 2-seater in America
The Chevrolet Corvette ranked 4th in sports car sales and 1st among 2-door, 2-seat models that some might call a true sports car. With 34,839 units sold throughout 2014, the Corvette was quite a way back from the far less expensive muscle cars, but GM sold more than three times as many Vettes in 2014 than Porsche sold 911s.

Scion is a Surprising 5th
While the Scion FR-S is often criticized for being a little short on power, it is one of the most entertaining cars to drive on the market today in terms of handling. Also, with a much lower price than almost anything else on this list, the FR-S offers an awesome driving experience for very little money. We really don’t hear much about the FR-S, but with 14,062 units sold in 2014, it was the 5th bestselling sports car in America.

The 911 Ranks 6th
The Porsche 911 is one of the most popular sports cars in the world and in the US market, it ranked 6th on my sports car list with 10,529 units sold. That is a solid number, but it is a far cry from the numbers of the Corvette, which is arguably the biggest competitor for the 911 in the US.

Nissan Sells More Q60s than 370Zs
The 7th bestselling sports car in America for 2014 is the Infiniti Q60. This comes as a surprise to me, not because the Q60 isn’t a great car, but rather because Nissan sold more of the pricey Q60 than they did the closely related Nissan 370Z, which ranks 10th.

The Other Toyobaru
Sitting in the 8th spot is the Subaru BRZ, which is basically the same car as the Scion FR-S with different badges. Surprisingly, the BRZ only sold about half as well as the FR-S, but that still made it the 8th bestselling sporty car in the US with 7,504 units sold.

Rounding Out the Top Ten
The Porsche Boxster and Cayman are listed together since they are essentially the same car in hardtop or roadster form and with 7,292 units sold, the smaller Porsche twins were 9th in sports car sales while the aforementioned Nissan 370Z closed out the top ten.

Some Surprises at the End
The 11th through 17th spots on my list of the bestselling sports cars in America for 2014 includes some high priced supercars that sell in low numbers because they are so expensive. This includes the Nissan GT-R (1,436) in 14th, the Dodge Viper (760) in 16th and the Audi R8 (735) in 17th. Surprisingly, the Mazda Miata ranks 11th and the BMW Z4 ranks 12th. In a short sales year, the brand new Lexus RC sold 1,922 units and managed to land in the 13th spot overall – a position that I would expect to see improve in 2015 based on the early success.

Finally, ranking a disappointing 15th is the Audi TT. It is a great car and it isn’t all that expensive – it just doesn’t sell well in the US.

Parks McCants wrote on January 7, 2015 - 10:41pm Permalink
Interesting read Patrick. Thanks for putting in the time to generate it. I had no idea that Detroit was pumping out these performance car sales numbers.