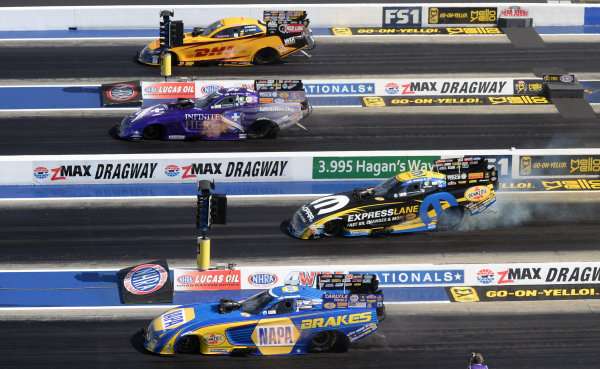 This past weekend, the NHRA headed to zMAX Dragway in North Carolina for the unique Four-Wide Nationals and when the final funny car race was run – Ron Capps’ Dodge Charger took the class win for the second week in a row, giving Don Schumacher Racing their fifth win in six events this season.
Advertisement

zMAX Dragway in Concord, North Carolina is a unique track, with four racing lanes rather than two and because of this unique layout, the NHRA runs an unusual four-wide format – hence the name of the event. Unlike every other NHRA event, where the cars race two at a time, the NHRA Four-Wide Nationals have the cars racing in sets of four. Since the lanes are arranged in pairs, each matchup of four cars is still technically two races, with two winners advancing from each round. The competition continues like this until the final round, which has four cars racing for the class win, so there is technically one less round than your average NHRA field of 16 drivers.

Qualifying
It should come as no surprise that the Dodge Charger funny cars from Don Schumacher Racing came out fast at the Four-Wide Nationals, with Capps, Beckman and Johnson all turning in 3.9X runs on their first pass down the track. On the other hand, John Force was the only JFR Camaro driver to run a 3.9 in the first round of qualifying, but with a time of 3.904 – Force was the quickest funny car driver after the first qualifying runs.

The funny car field got faster in the second round of qualifying, with Courtney Force and Robert Hight driving their Camaros to the top of the class with runs of 3.851 and 3.873 while John Force grabbed the third sport with a 3.888. Matt Hagan’s Charger was close behind with a 3.898 while Tim Wilkerson’s Mustang sat fifth after the second round of qualifying while Ron Capps sat sixth with a 3.904.

This meant that the John Force Racing Chevrolet Camaro funny cars had each of the top three spots on the ladder while the Don Schumacher Racing Dodge Charger funny cars would start in fourth, sixth, seventh and tenth.

Four-Wide Eliminations
In the first round of eliminations at the NHRA Four-Wide Nationals, Courtney Force took on Jonnie Lindberg and JR Todd took on Bob Tasca. Todd beat Tasca in a pair of slow runs while Lindberg laid down the only good pass of the four, knocking out top qualifier Courtney Force and Camaro.

Next Matt Hagan and his Dodge Charger took on Bob Bode while Tim Wilkerson and his Mustang battled Cruz Pedregon, with Hagan and Wilkerson each winning and advancing to the next round.

The third group of Round 1 saw Robert Hight battle Jim Campbell while a Tommy Johnson Jr and Jack Beckman carried out a fight between Dodge Charger teammates, with Hight and Fast Jack getting the wins and setting up a great Camaro-Charger matchup In the next round.

Finally, the first round closed with John Force beating Chad Head while Ron Capps beat Del Worsham, setting up another Dodge-Chevy battle in the second round.

In that second round, Lindberg, Todd, Hagan and Wilkerson all went head to head, with Hagan being the first to the finish line as JR Todd won his pairing – advancing each of them to the Four-Wide final round.

In the other half of the bracket, we had a pair of DSR Dodge Charger-vs-JFR Chevrolet Camaro – and team Mopar shined through. Beckman beat Hight and Capps beat John Force, sending the two Chargers into the final round where they would meet up with JR Todd and Matt Hagan.

The Four-Wide Finals
The unique Four-Wheel Finals at zMAX Dragway saw the DHL Toyota Camry of JR Todd battling with the Dodge Chargers of Matt Hagan, Ron Capps and Fast Jack Beckman. In this final round, there is only one winner so this quartet of funny cars fought for all of the marbles.

Matt Hagan had the best reaction time and he grabbed an early lead, but when he smoked the tires, he watched the other three cars race away. It ended up being a close fight between Capps and Beckman, with Ron Capps taking the win for the second event in a row and the fifth funny car win for Don Schumacher Racing in the six events this season.

Mae wrote on January 5, 2019 - 2:02pm Permalink
Hi to all, it's really a pleasant for me to pay a visit this web page, it consists of useful Information.