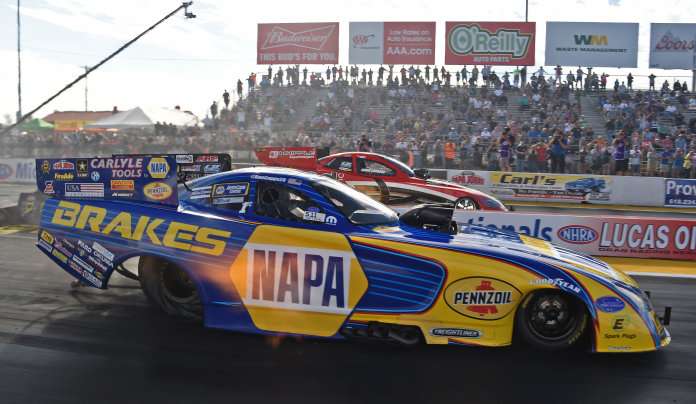 Ron Capps won his second race of the Countdown to the Championship portion of the NHRA season this past weekend, beating Jonnie Lindberg and extending his lead in the battle for the title with just 3 events left this season.
Advertisement

Ron Capps and his Dodge Charger R/T have been the most dominant force in the NHRA Funny Car big leagues this year, winning 7 of the first 20 races, holding a big lead in the championship race throughout most of the season and reclaiming the lead in the Countdown to the Championship by winning the previous event at the Dodge Nationals in Maple Grove.

Capps came into the 21st event of the season – the AAA Insurance Midwest Nationals at Gateway Motorsports Park – with the hopes of continuing his winning ways and extending his league the title chase. He succeeded on both counts.

Qualifying
The qualifying efforts for the AAA Insurance Midwest Nationals started off hot and heavy, with four drivers (Robert Hight, Ron Capps, Jack Beckman, John Force) all running in the 3.8X range while the Camaro of Hight set the pace with a 3.845 while Capps ran a 3.852 to take the second spot. Mind you, that is a pair of John Force Racing Camaro funny cars and a pair of Don Schumacher Racing Dodge Charger funny cars in the top 4, which has been pretty common all season long.

In the 2nd round, there were more 3.8 runs with several of the top cars from the 1st round turning in quicker times while some other drivers jumped up into the top of the order with their own strong runs. Hight was able to keep his Camaro in the top spot while teammate John Force jumped up to 2nd, pushing Capps back to 3rd while Alexis DeJoria jumped into the 4th spot – pushing Beckman back to 5th.

Tommy Johnson Jr and Courtney Force both ran in the 3.80s as well, with Force grabbing the 6th spot while Johnson sat 8th and Matt Hagan – the only JFR or DSR driver not mentioned above – sat 12th with a 3.93 run.

The run order at the top 4 spots of the funny car class would remain the same through the 3rd and 4th rounds of qualifying, but in the 4th round, Jonnie Lindberg ran a 3.871 to jump up into the 5th spot – pushing Beckman and Courtney Force back a spot.

This meant that going into eliminations, there were a pair of JFR Chevrolet Camaros in the top 2 spots followed by Ron Capps’ Dodge Charger in 3rd and the Toyotas of DeJoria and Lindberg in 4th and 5th. Jack Beckman would start 6th, Courtney Force was 7th, Matt Hagan moved up to 8th and Tommy Johnson Jr fell to 9th.

In round 2, Robert Hight used a hole shot win to beat Matt Hagan in the first JFR-DSR battle of the event. The 2nd round also saw a pair of inner-team matchups, with John Force beating daughter Courtney while Ron Capps beat Jack Beckman. Finally, in the battle of the Toyotas, Lindberg beat Alexis DeJoria.

In the finals, the two drivers pulled nearly identical reaction times (0.72 for Capps, 0.73 for Lindberg), but in a great drag race, the Dodge Charger beat the Toyota Camry in a close finish. That marks Ron Capps’ 8th win of the season, his 2nd during the Countdown portion and his 57th career win in the class, but more importantly, he extended his lead in the championship race.