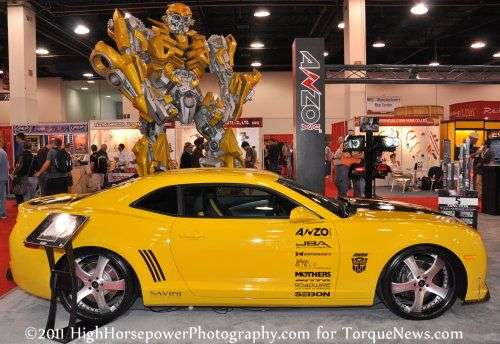 Camaro leads in May 2011 as segment sales slow

The numbers from the major players in the rear wheel drive performance segment and even though numbers are down across the board, for the fifth straight month the Chevrolet Camaro has posted a comfortable lead in the segment over the Ford Mustang, the Dodge Challenger and the Nissan 370Z.
Advertisement

Chevrolet moved 9,451 Camaros in May 2011, accounting for a 5.8% increase over the same month in 2010 but it is a decline from the 10,000+ Chevy muscle cars sold in April. Even with the decline in sales from the previous month of over 1,400 units, the Camaro still held a comfortable lead for the fifth straight month – continuing its dominance over the Mustang, Challenger and 370Z for the 2011 calendar year. For the year, General Motors has sold a total of 40,275 Chevrolet Camaros – up 3.7% from where they were at this point in 2010.

The Ford Mustang held onto the second spot in segment sales with 6,607 pony cars sold. The fact that the Mustang was in the second spot in segment sales was a good thing but overall, this past month was a rough month for the Mustang. Compared to May of 2010, 6,607 units accounted for a hefty decline of almost 36%, along with showing a drop of almost 1,600 units from April. The current Ford Mustang has proven itself to be the quickest and most fuel efficient car in the class but that hasn’t helped the mighty Mustang outsell the Camaro in any of the five months this year.

The Dodge Challenger continues its relatively consistent pace with 3,418 units sold in May 2011. This numbers accounts for an 11% decline over the 3,800+ Challengers sold in May 2010 as well as a decline of 199 units over April 2011. The Challenger is at a general disadvantage compared to the Camaro and Mustang as it is slightly more expensive across the trimlines and the lack of a convertible option instantly removes the brawny Mopar muscle car from those looking for some drop-top fun.

Finally, the Nissan 370Z rounds out the segment as Nissan sold just 847 examples of their sleek sports car in May 2011. Granted, the 370Z lacks the power and size of the V8 mills offered in the Camaro, Mustang and Challenger but with 350hp, the Nissan does offer comparable power to the American competition. However, with only 847 units sold last month, the Japanese automaker posted a decline of 11% compared to last May and a drop of almost 100 units from just one month ago.

Anonymous wrote on October 16, 2011 - 1:00am Permalink
I love the Dodge Challenger! The Challenger is the best looking car on the road. Period! I can't understand why anybody would like the cartoonish Camaro. The Camaro is ugly as sin and it was in a stupid "Transformers" movie...that's just insult to injury.
Anonymous wrote on January 23, 2012 - 1:56pm Permalink
The reason it was in the transformer s movie is because is the best looking car on the market and out out preforms the challenger and that's fact