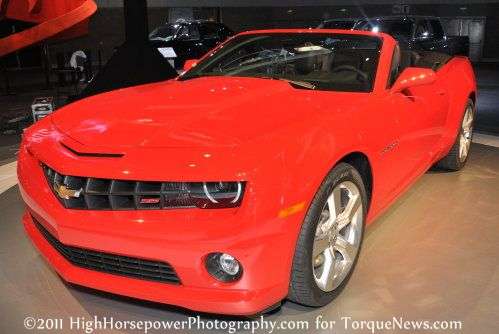 The Chevrolet Camaro Convertible is popping up in dealerships all over the country, helping General Motors to top the 10k mark in April 2011 with 10,852 Chevy muscle cars sold last month. This accounts for an 18.6% improvement over April of last year and this is an increase of almost 2,000 units compared to March 2011. Thanks to its best month of the year, the Camaro once again lead the rear wheel drive, performance coupe class – giving it a shutout so far through 2011.

The Ford Mustang was second in terms of sales figured with 8,180 new pony cars giving Ford a whopping 59% improvement over April last year. The bad news is that Ford sold over 8,500 Mustangs in March 2011, meaning that sales declined from March to April, although the Mustang still showed a strong growth rate over the same period last year. Just a few months ago, Ford was in jeopardy of being passed by the Dodge Challenger in sales but the Mustang has pulled back away from Dodge’s retro muscle car these past two months.

The Dodge Challenger never posts huge numbers but, as always, the brawny Mopar muscle car stayed consistent through April 2011. With 3,617 Challengers sold last month, Dodge moved around 300 less units than they did in March and around 100 less than they sold in April last year so things aren’t booming for the Challenger, but they also aren’t plummeting. The Challenger has been a steady 3,000-4,000 unit seller over the past two years and with the changes made to the 2011 models, the popularity is bolstered a bit but in the long run – the Challenger is still the most expensive when compared side by side to the other two Detroit muscle cars.

Since the Nissan 370Z is frequently included in discussions with the Camaro, Mustang and Challenger, I thought that it deserved a mention in this sales piece…as this is a rear wheel drive performance coupe. The 370Z packs a pair of 3.7L V6 mills depending on the package chosen, making either 332 or 350 horsepower with a price ranging from $31,000 to $41,000. This makes the 370Z more expensive than the slightly less powerful American V6 muscle cars and the lack of a V8 engine takes it out of any real competition with the 400+ horsepower LS3, 5.0 or Hemi…but the history of this fabled Japanese performance cars keeps it going year after year. Last month, the Z moved 942 units – a decline of roughly 1% from the same month in 2010.

Neo wrote on December 25, 2011 - 9:59pm Permalink
You are saying that 370z is taken out of real competition since it doesn't come with a V8. But even in a straight line it can keep up with newest V8 mustangs, camaros, challengers (note that 2009 370z is much faster than 2009 mustangs, camaros, challengers but the new muscle cars have stepped up since then). The reason 370z is more expensive is because has superior handling and better quality interior.

Tesla Giga Berlin's New Hurdle: It's Not Only the Gov't, but Now Tesla Itself
Teslas Are Sold Out Until 2023, But The Timing May Reverse
END_OF_DOCUMENT_TOKEN_TO_BE_REPLACED