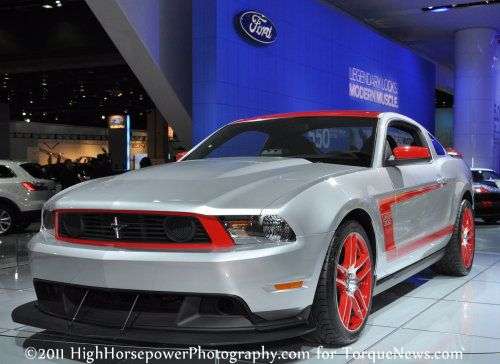 While speaking to a small audience at Princeton University last night, Ford Motor Company Bill Ford Jr., stated that there would be an EcoBoost version of the fabled Ford Mustang.
Advertisement

There have been plenty of rumors and speculations over the past few years about the return of the turbocharged Ford Mustang, following in the footsteps of the Turbo GT and SVO Mustangs of the early 1980s. Although Ford execs have been quoted as saying that soon, every Ford vehicle would offer an EcoBoost option, it has not been definitively confirmed by anyone at Ford Motor Company that there would be a new Ford Mustang featuring their innovative EcoBoost technology – until now.

The folks at Jalopnik broke this story a short while ago, adding that when they contacted the folks at Ford public relations, the company would not deny that there was an EcoBoost’d Ford Mustang in the works. There is no clear indication as to whether Ford will use the newer 4-cylinder EcoBoost, the 3.5L V6 EcoBoost used in the Lincoln MKS and Ford Taurus SHO or a new EcoBoost engine but all three are possible options.

The first and most unlikely EcoBoost Mustang would carry a 4-cylinder. This would probably be some sort of super-efficient entry level engine, coming in below the 305hp 3.7L V6, but not far below the current base engine. Imagine a 285hp Mustang coming in a special green paint code with a catchy eco-friendly name, offering something like 40mpg. Again, not likely - but something to think about.

The next and most exciting option would be to see the EcoBoost turbocharging technology applied to the new 5.0L V8. This could make for an incredible high performance Mustang and with the Ford Racing supercharger package offering 624hp on stock internals, the new 5.0L can clearly handle boost. There have even been rumors that Ford of Australia has been working a turbocharged version of the new 5.0 for the next generation of the SVT GT500 but those are somewhat contradicted by the announcement of the Boss models in Australia, which use a supercharger to make big power in vehicles like the Ford Falcon. Also, while speaking with 5.0 chief engineer Mike Harrison, he mentioned that the 5.0 wouldn’t make for an ideal turbocharging engine in the Mustang chassis because there isn’t enough room…but he added the closing comment “unless we tucked the turbo up top like we did with the new Powerstroke”. That almost sounded like foreshadowing to me – but this is again just a hopefully “what if”.

Finally, the most likely occurrence of the EcoBoost in the Ford Mustang would be something based on the popular EcoBoost V6 used in the Ford Taurus SHO and Lincoln MKS. This engine delivers 355hp (Lincoln) and 365 (SHO) so with similar power to the Ford sedan, a Mustang powered by the 3.5L twin turbocharged EcoBoost V6 could offer around 365hp with less vehicle weight than the AWD full-sized sedan. 365 horsepower would nestle this EcoBoost Mustang right down between the 305hp Mustang V6 and the 412hp Mustang GT and with performance like that, it would be reminiscent of the SVO and Turbo GT Mustangs of yesteryear. Those turbocharged 4-cylinder Mustangs offered more power than the base model but slightly less power than the Mustang GTs powered by the 5.0L V8 and with the help of the EcoBoost technology, this modern SVO Mustang would offered improved fuel economy over the other current Ford Mustangs.

There are no real details available, other than the fact that company leader Bill Ford Jr., says that it is coming but will the automaker really contradict the man who carries on the Ford name? probably not…so I hope to hear more about an EcoBoost’d Ford Mustang in the near future.