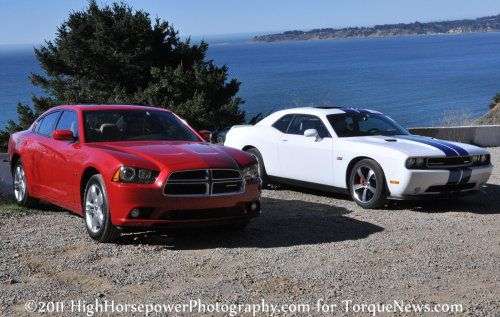 Dodge has taken the 2011 Challenger SRT8 392 and Charger R/T around the country to show off the beefed up coupe and redesigned sedan, and while they were on the road they hit a dyno shop to see just how much power these two modern Mopar muscle put to the road.
Advertisement

For the 2011 Dodge Charger R/T, this is the first time that we have seen dyno numbers for the high performance sedan and with an assumed 15% drivetrain loss (the “norm” for measuring rear wheel drive vehicles), these power numbers are no surprise. Dodge rates the new Charger R/T at 368 horsepower so a 15% loss between the engine and the wheels would put the car closer to 312hp, so it looks like Dodge may be underrating the output of the 5.7L Hemi a bit.

When it comes to the 2011 Dodge Challenger SRT8 392, this is not the first time someone has strapped it to the dyno, as the Inside Line tested the modern muscle car a few months ago with an incredible 452 wheel horsepower (click here for more on the Inside Line dyno tests). With a 15% drivetrain loss, that would suggest that he 392 cubic inch Hemi is making over 500 horsepower at the crankshaft – a hefty jump over the claimed horsepower.

The dyno numbers from Dodge are not quite as impressive at 420hp, but with the same 15% assumed drivetrain loss, the 2011 Challenger in its SRT8 trim is still making more than the advertised power levels. A 15% drivetrain loss on a 470hp engine would put it in the area of 400 wheel horsepower and to reach 420hp, you would need somewhere in the area of 495hp.

While this is a big jump from the 452 wheel horsepower experienced by the folks at Inside Line, these somewhat-official dyno numbers with Dodge representatives on hand would suggest that, indeed, the 2011 Challenger SRT8 does make more than the advertised 470hp.

These numbers can be interpreted in two ways – either the Hemi V8s in the 2011 Charger R/T and 2011 Challenger SRT8 392 are both underrated or something was awry with the dyno used for then tests. Some people will insist that these cars are “juiced” – or slightly tuned to make more power to create some buzz for the vehicles.

Others will insist that either the dyno was not tuned properly or some parameter was improperly adjusted, thus giving a false reading. Even more will point out that a Dynojet brand dynamometer is “friendlier” than other brands, often yielding higher numbers than some other brands of the horsepower-testers. However, when you consider the fact that Inside Line and Dodge representatives have tested the Challenger on two different dynos, both getting better-than-expected numbers, it is most likely that the 5.7L and 6.4L Hemi V8s in the 2011 Dodge lineup are slightly underrated.

This is not a new thing, as Dodge has been underrating their performance engines since the 1960s to both help owners with insurance costs as well as keeping the competition guessing. The 6.1L Hemi in the previous Challenger SRT8 was found to make more than the advertised 425hp and thanks to a handful of new tests it looks as though the awesome new SRT8 392 follows in a tradition of big (yet underrated) power numbers.

Watch the dyno video courtesy of the folks from RedLetterDodge and the Hemi Highway Tour by clicking here and for a look at the LA Auto Show debut of these two new models, check out the gallery below.